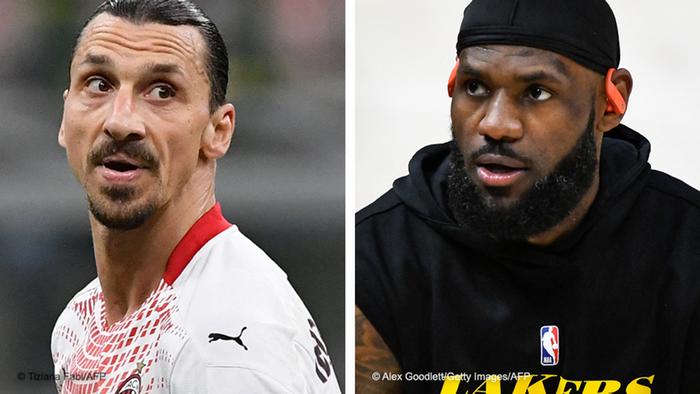 A feud between LeBron James and Zlatan Ibrahimovic gathered pace on Saturday after the LA Lakers star hit back at the Swede's criticism of his political activism, promising he will never "shut up" about social injustice.

The basketball superstar also pointed out Ibrahimovic's hypocrisy after the soccer player called out racism in his native Sweden just three years ago.

The former LA Galaxy striker, who now plies his trade at AC Milan, criticized James and other socially conscious athletes on Thursday in an interview with Discovery Plus. Ibrahimovic said  it was "a mistake" for James and other sports stars to get involved in political causes.

"I like him [LeBron James] a lot. He’s phenomenal, but I don't like when people with a status speak about politics. Do what you’re good at doing."

James responded forcefully to Ibrahimovic's stance. Speaking after the Lakers' 102-93 victory over the Portland Trail Blazers, James said: "I will never shut up about things that are wrong."

"I preach about my people and I preach about equality, social injustice, racism, systematic voter suppression, things that go on in our community," he continued.

"I know what's going on still, because I have a group of 300-plus kids at my school that's going through the same thing, and they need a voice, and I'm their voice. I'll use my platform to continue to shed light on everything that's going on around this country and around the world. There's no way I would ever just stick to sports, because I understand how powerful this platform and my voice is.''

James also made it clear he was aware of comments made in 2018 by Ibrahimovic, the Swedish-born son of a Bosnian father and a Croatian mother.

"He's the guy who said in Sweden, he was talking about the same things, because his last name wasn't a [traditional Swedish] last name, he felt like there was some racism going on when he was out on the pitch," James said.

Ibrahimovic told Canal Plus in January 2018 that "undercover racism" caused the Swedish media and public to treat him with less respect. "This exists, I am 100% sure, because I am not Andersson or Svensson," he told the French broadcaster. "If I would be that, trust me, they would defend me even if I would rob a bank."

"Every athlete can use our platform and try to make change in this world,'' Schröder said. "Zlatan, he's a little different. Unique player, unique character."

James also garnered support in the shape of US sprint legend Michael Johnson. "Okay Ibra, based on your position @KingJames is great at basketball and shouldn’t voice his opinion about politics," the Olympic gold medalist tweeted.

"You’re really good at football so you shouldn’t voice your opinion about LeBron using his platform for good. Or your opinion on anything outside football!"

'Shut up and dribble'

James’ activism on racial justice issues and his criticism of Trump prompted Fox News commentator Laura Ingraham in 2018 to tell him and fellow NBA player Kevin Durant to "shut up and dribble."

DFB to investigate report of racism during Bundesliga match

The German FA will launch an investigation in to a report that Bayer Leverkusen's Nadiem Amiri was the subject of racist abuse against Union Berlin. Union sporting director Oliver Ruhnert denies it happened.