A BBC parody titled "The Real Housewives of ISIS" has started a debate on social media about the limits of satire. Is the criticism fair and what do Arabs themselves think of satire about the jihadists? 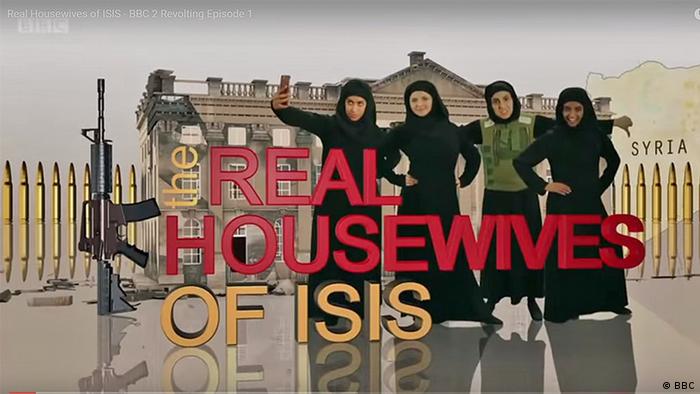 The satirical clip, which was released Tuesday by a BBC Two sketch show called "Revolting," features four British women - Afsana, Mel, Zaynab and Hadiya - who had fled to Syria to marry jihadist fighters for the so-called "Islamic State" (IS) militia. They dress in suicide belts, pose for selfies and gossip about their husbands.

"This is my sixth marriage, been widowed five times," said Zaynab. Then all of a sudden the building shakes as if hit by a bomb - "six times" she interjects. Her former "husbands" were killed in airstrikes.

"Ali bought me a chain, which is eight feet long. I can almost get outside, which is great," said one of the wives who had been chained up by her husband.

"Revolting" is written by British comedians Joylon Rubinstein and Heydon Prowse. They view IS to be a fair target for satire.

"It's important not to pull your punches in satire," Prowse told Britain's "i" newspaper. "You have to be fearless or it undermines your credibility."

Reactions on social media were mixed. Those in Britain tended to be more offended while those coming from Middle Eastern countries tended to enjoy the skit.

Some users like Londoner Meraj claim that the sketch pokes fun at those women living in IS-controlled territory. In IS-controlled territory in Iraq and Syria, women are subjected to wearing black headscarves and to serving their husbands without resistance. If they don't submit to the rules, death is often the punishment, if not beating or rape.

Harry Shotton is an international relations student at the University of Leeds and a contributor to the "Huffington Post." He claims that this sketch is another attempt at "Islamophobia" towards Muslim women.

British Muslim comedian and Twitter star Ali took the sketch in stride, saying that it is pointing out the absurdity of young women going to marry jihadi fighters in Syria. These young women are leaving rich, stable Western countries to move to an unstable, poor territory controlled by a terrorist group.

Rasha Al-Aqeedi, an Iraqi and research fellow at the Al-Mesbar center in the United Arab Emirates, tweeted how Muslims in Arab countries view the sketch versus those in the West.

Another Iraqi, who goes by the name "Mosul Eye," actually lives in Mosul under IS occupation. He shared the video on Facebook and Twitter with the hashtag #goodjobBBC.

Arab user Marduk tweeted, "A satirical documentary coming to BBC next week," with a laughing emoji.

IS satire in Arab world

Although many in the Western world are offended by a sketch taking aim at IS, this form of comedy is often quite popular in the Arab world. Numerous comedy programs in the Arab countries find IS and other terrorist organizations to be valid targets for parody.

The Iraqi Al-Basheer show, for example, takes aim at IS in Iraq and other groups that seek to destabilize the country. Members of the troupe dress up as the terrorists in comedy skits and mock them.

But comedy against Islamist groups in the Middle East also is a risky venture. In 2015, a Saudi TV star by the name of Nasser Al-Qassabi came under fire due to his show "Selfie," which mocked IS and other fundamentalist groups. He received death threats from Islamist groups on social media for his dare to make fun of the group in the Middle East. He remained defiant, however, and his show still airs on Dubai channel MBC.

"God is my protector. I'm an artist, and the artist's essential role is to reveal society's challenges even if he pays a price," he said to Saudi broadcaster Al-Arabiya in July 2015.

The sketch's main focus, British women who married IS fighters, has become a daunting problem for European authorities in recent years. In August 2016, 17-year old Kadiza Sultana was killed in an anti-IS airstrike in Raqqa after being enticed online to marry a jihadi fighter there. She was the first female British member of IS to have been killed.

Joe Biden, the Pope, and the looming schism in America's Catholic Church