BayernLB under pressure over Dakota pipeline investment | Germany| News and in-depth reporting from Berlin and beyond | DW | 06.02.2017

Bavaria's state bank is set to invest about $120 million in the Dakota Access Pipeline, which threatens a Native American reservation and drinking water. Other banks have already sold their stake. 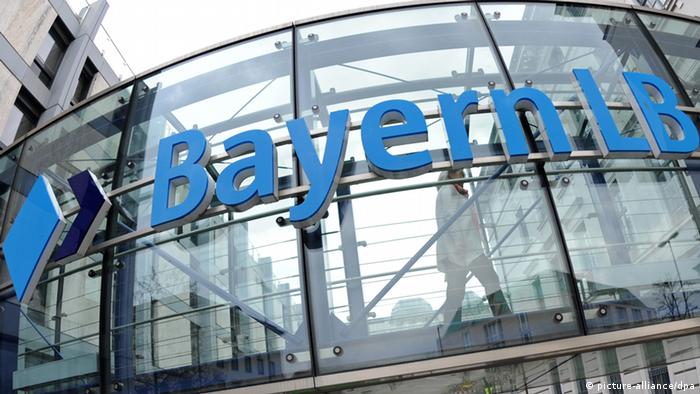 There aren't many members of the Sioux tribe living in Bavaria, but, thanks to the tentacles of international finance, the protests against the Dakota Access Pipeline (DAPL) being built near the Standing Rock Indian Reservation in the US have reached the streets of Munich.

Last week, protesters from an alliance of NGOs arrived on the doorstep of the BayernLB bank to deliver more than 700,000 signatures. They had been collected via worldwide petitions against DAPL's 17 financial investors, including the Bavarian state bank, which is contributing $120 million (111 million euros) of the total $2.5 billion cost. More than 220,000 signatures were on a petition specifically aimed at BayernLB, though that figure had almost climbed to 300,000 by Monday 6.

Despite an invitation from environmental campaigners Urgewald, BayernLB declined to send any representatives outside the building to receive the petition. "But we were allowed to go in with a delegation of three people, and we gave the petition to the press spokesman," said Regine Richter, banking specialist at Urgewald.

The bank itself is unwilling to give interviews on the subject, and in response to DW's request would only send the public statement it issued in December, which had made many conciliatory noises. "BayernLB is following the running discussions about the route of the pipeline very carefully and, as part of the consortium financing the pipeline, supports an amicable result of the discussions between the parties," it read. BayernLB added that it was waiting on a report from the US law firm Foley Hoag, commissioned in December to look into how the local indigenous people had been consulted for the project. That report is due out later this month, but it may come too late, because within days of taking office in January, US President Donald Trump signed an executive order decreeing that the environmental review for the project be fast-tracked.

"Nobody is really sure that means, but we are concerned that DAPL could get the green light any day now," Nick Pelosi, corporate engagement director for the campaign group First Peoples Worldwide, told DW. "It's such an urgent matter at this point that we really don't have time."

Not only that, Pelosi is also concerned that the study is being conducted behind closed doors and may be no more than a desktop assessment. "From what we understand, it is a study on tribal consultation, which is the crux of this issue - that the tribe was not consulted properly about this pipeline," Pelosi said. "But nobody's reached out to the tribe, so it's essentially a study on consultation without any consultation."

All 17 banks insist that the loans for DAPL are now legally committed. "But some have shown concern and that they are willing to exert the limited influence that they have," Pelosi said.

"I definitely think they're feeling the pressure," he said. "But what the tribe is asking is not necessarily for the banks to pull out, but to use their influence as project lenders to pressure the company into rerouting to avoid their treaty territory."

The banks' influence appears to be very limited indeed. They argue that they can't impose new conditions on the loans and that it isn't their role to determine the route. "Which is true - it's the US government's responsibility - but we're asking them to support the reroute, not dictate it," Pelosi said. 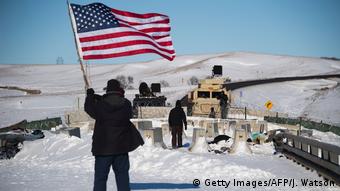 Dozens of protesters have been arrested at the Standing Rock reservation

Compared with other banks, BayernLB has been particularly recalcitrant. "BayernLB was one of the few that outright rejected our request for dialogue," said Pelosi.

"BayernLB is being much too passive," Richter said. "Banks like the Dutch ING and the Norwegian DNB are at least expressing public criticism of the pipeline consortium's behavior or are selling stakes in the companies involved."

Meanwhile in Germany, BayernLB's involvement in the project has raised some political hackles - firstly because it is partly owned by the state, and secondly because it received a colossal taxpayer-funded 10-billion-euro ($9.3-billion) bailout during Europe's financial crisis in 2008.

"BayernLB should not be allowed to support the dirty business of climate denier Donald Trump," said Anton Hofreiter, the Greens' parliamentary leader and a native of Bavaria. "This project destroys the environment, is a risk for the drinking water from the Missouri River and at the same time desecrates the Native Americans' cultural heritage."

Hofreiter, along with other German politicians, is sure that BayernLB's commitment to the project could be reversed by Bavaria's state government. "I'm sure it's possible," Frank Schwabe, Bundestag member for the Social Democrats, told DW. "The bank has oversight committees, and there is political influence on that, so it would be good if the politicians in Bavaria would take a clear position on it. We're discussing the issue of company and bank responsibility more and more, and I think that a state bank in particular needs to stick to that."

Just a week into his presidency, Donald Trump is already undermining inclusive decision-making on environmental issues. Experts in the USA and abroad are concerned. (01.02.2017)

Two Dakota Access Pipeline protesters hung a banner from the rafters of the Minnesota Vikings' stadium during an NFL game. The stadium is sponsored by a bank that invests in the pipeline project. (02.01.2017)

The first groups of veterans have arrived in North Dakota to join in a protest against a pipeline project near tribal lands. Thousands of veterans are expected to form a human chain around the demonstrators this weekend. (02.12.2016)