The first groups of veterans have arrived in North Dakota to join in a protest against a pipeline project near tribal lands. Thousands of veterans are expected to form a human chain around the demonstrators this weekend. 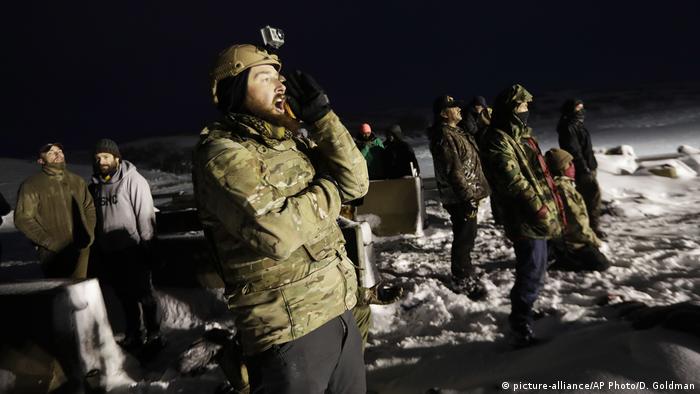 US military veterans began arriving in Cannon Ball, North Dakota on Thursday to join Native American and environmental activists in a protest against the Dakota Access Pipeline.

"I bought a one-way ticket," Navy veteran Matthew Crane, told Reuters news agency at the main camp. "Hopefully we can shut this down before Christmas."

Thursday night, a group of 15 to 20 veterans staged a symbolic protest to show solidarity with pipeline protesters by walking into a bridge area blocked by police. Some in the group wore camouflage jackets as they asked officers standing guard to lay down their arms.

Around 2,000 military veterans are expected to arrive this weekend and form a human wall between demonstrators and police, the protest organizers said on their Facebook page.

According to the page, groups of veterans in Florida, Colorado and Texas are en route to the protest encampment where thousands are weathering snow and freezing temperatures.

Other veterans organizations in North Dakota took exception to the group's efforts to act as human shields for the protesters, saying the protest has damaged property and would reflect poorly on veterans nationally.

"Participating in this kind of assembly even as a peaceful bystander or participant will only mar the image of the North Dakota veterans and the veterans of our nation," North Dakota Veterans Coordinating Council President Russ Stabler said.

Protesters, who refer to themselves as "water protectors," have spent months demonstrating against plans to route the $3.8 billion(3.6 billion euros) pipeline beneath a reservoir near the Standing Rock Sioux reservation. They argue that the pipeline poses a threat to water resources and sacred tribal lands. They are awaiting an Army Corps decision whether to allow the pipeline project owners to tunnel under the Missouri River. The decision has already been delayed two times.

On Monday, North Dakota Governor Jack Dalrymple issued a "mandatory evacuation" of the camp "to safeguard against harsh winter conditions." The governor said on Wednesday that the state has no plans to block food and supplies from entering the camp. The US Army Corps of Engineers also said they have no plans to evict protesters from the camp.

Temperatures in Cannon Ball are expected to fall to 6 degrees Fahrenheit (-14 Celsius) by next week, according to Weather.com forecasts.

Activists in the camp say they are prepared to weather the winter and are training supporters from warmer states how to deal with the biting winds and drifting snow.

Over 525 people from across the US have been arrested at the protests since August. In one recent clash between police and protesters near the pipeline path, officers used tear gas, rubber bullets and water hoses in below-freezing temperatures.

Organizers said at least 17 protesters were taken to the hospital for hypothermia and one for an arm injury while one officer was hurt.