Treble-winners Bayern Munich will play a fundraiser in the Bavarian city of Passau to help victims of the heavy flooding in Bavaria and other parts of Germany. The club said it "wanted to give something back." 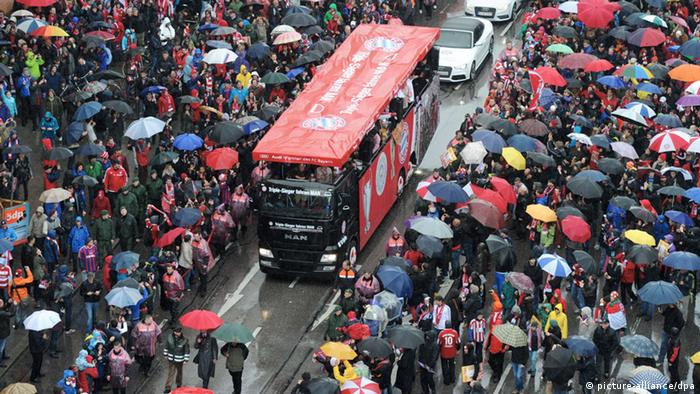 Bayern Munich announced on its website on Friday that the club would play a special match in Passau to help victims of severe flooding over the past week.

"When people are in need, all of Bavaria stands united," the club's press release said.

Chancellor Angela Merkel has been in the German flood areas where she promised swift help. Some politicians have profited from such natural disasters in the past, and Merkel will want to do the same. (05.06.2013)

Chairman Karl-Heinz Rummenigge met with Bavarian State Premier Horst Seehofer on Friday, with the two influential Bavarians agreeing that the charity match would take place. According to Bayern's website, the freshly-crowned treble-winners - who claimed the Bundesliga league title, the German Cup and the Champions League this season - would play against a regional Bavarian eleven, with all the proceeds going to help flood victims.

"Our team in particular has received so much support and solidarity from the population in recent weeks and months that, in light of the dramatic images from the flood-affected areas, we now want to give something back and play in a fundraising game to help the victims of the flooding catastrophe," Rummenigge said.

Passau, a city built on the intersection of three rivers including the Danube, was particularly hard-hit by floods in recent days. State Premier Seehofer thanked Bayern's players and management "for this wonderful gesture."

"It's really something special, when the global market leader in football sends such a strong signal of solidarity with the people in our state," Seehofer said, remembering to tip his cap to a recent report that found that Bayern Munich had overtaken Manchester United as the world's most recognized football brand.

Bayern Munich won this year's Bundesliga by a record 25-point margin, tearing up a string of other single-season league records in the process. The Bavarians toppled rivals Borussia Dortmund in the first all-German Champions League final ever in May, and rounded off the first ever "treble" by a German club by beating Stuttgart in the German Cup final on June 1.

Bayern's press release said that the game would take place "in the near future."