Bayern cruise past Olympiacos to advance to round of 16 | Sports| German football and major international sports news | DW | 24.11.2015

Bayern cruise past Olympiacos to advance to round of 16

Bayern Munich have clinched a berth in the Champions League round of 16, beating Greek side Olympiacos 4-0. The Germans dominated the match from start to finish - despite being down to 10 men for most of the second half. 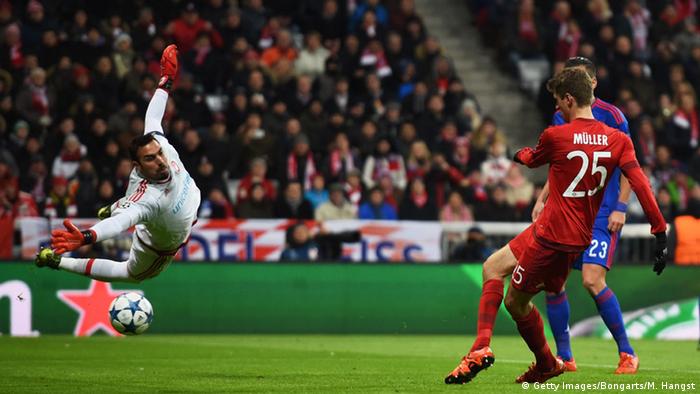 Despite going into the match in the driver's seat in Group F after four games, coach Pep Guardiola insisted at his pre-match press conference on Monday, that there would be no taking the foot off the gas against Olympiacos, a team they could be expected to beat in the confines of the Allianz Arena.

True to his word, Guardiola had his charges firing on all cylinders from the opening kick off on Tuesday evening, taking the Greek side out of the game with three goals in just the first 20 minutes.

It took a whole eight minutes for the Bavarians to find the back of the net for the first time. Jerome Boateng hit a powerful drive from well outside of the area, forcing a good save from Roberto in the Olympiacos goal, but he couldn't hold onto the ball. The pacey Douglas Costa gobbled up the rebound and beat the Spanish keeper with a strike to the far side of the net to make it 1-0.

Eight minutes later it was Lewandowski's turn. The Polish striker first inadvertently blocked a long-range effort from Kingsley Coman, the ball hitting him in the back of the leg. Level with the defenders, Lewandowski managed to dig the ball out of his feet and found himself with a free shot from a good angle. He just doesn't miss chances like that! 2-0 for Bayern after 16 minutes.

Four minutes later, Roberto must have thought he was trapped in a pinball machine. First Coman tried a volley but miss-hit it. It fell to the head of Arjen Robben on the outside of the box, he headed a cross to Müller who was waiting in front of the center of goal for the easy tap in. The game was essentially over after 20 minutes.

This is where you could argue that Pep's men didn't quite keep his promise, as Bayern did seem to take their foot off the gas somewhat, but who could blame them? Sure, they created chances, but the ruthless finishing was missing.

There was also an unsettling sight for Bayern fans, as Arjen Robben was subbed off with a leg injury in the 33rd minute, and replaced by 20-year-old Joshua Kimmich. Even before the game was over, though, Bayern had reassured their fans that the injury was minor.

Second half with 10 men

Bayern came back out for the second half with that three-goal lead, but in the 53rd minute, Olympiacos were thrown what might have been a bit of a lifeline, as Holger Badstuber got wrongsided by Ideye Brown bearing down on Bayern's area and could find no better solution than to commit a foul. The referee saw this as having denied Brown an obvious goal-scoring opportunity, and as such sent Badstuber do the showers. 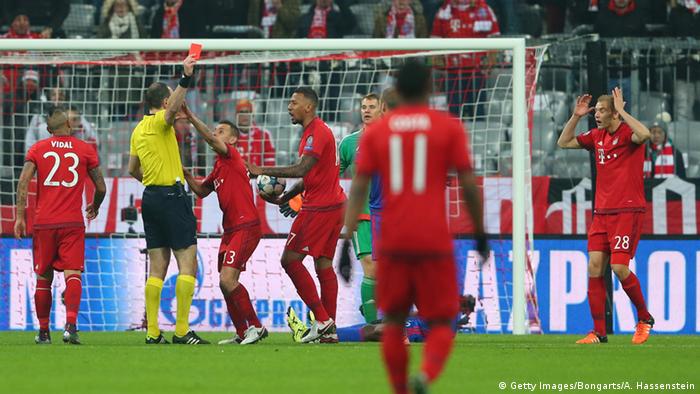 Olympiacos, though, were unable to take advantage of the extra man, the Greek side unable to muster a shot on target. Bayern continued to look pretty much as though they still had 11 men, creating several more chances. They only made good on one - when Kingsley Coman headed in from close range in the 69th minute. Roberto came out to punch the ball away - and missed, giving Coman a bloody lip in the process.

This would make the final score 4-0, but it could have an maybe should have been five. Müller's final effort at goal, though, hit the woodwork.

With the victory, Bayern have not only advanced to the round of 16 with one match day left in the group stage, but they have also clinched first place in the group. Although Olympiacos could theoretically still draw level on points in the group stage games next month, Bayern would finish first based on the two team's head-to-head record in Group F.

Bayer Leverkusen have fought to a 1-1 draw in Belarus to keep alive their slim hopes of advancing to the round of 16. It was a scrappy contest that featured a couple of strange goals. (24.11.2015)