A police bomb squad rushed to a Bavarian forest in response to a call about a suspected hand grenade. They gave the all-clear after the suspect device turned out to be a sex toy. 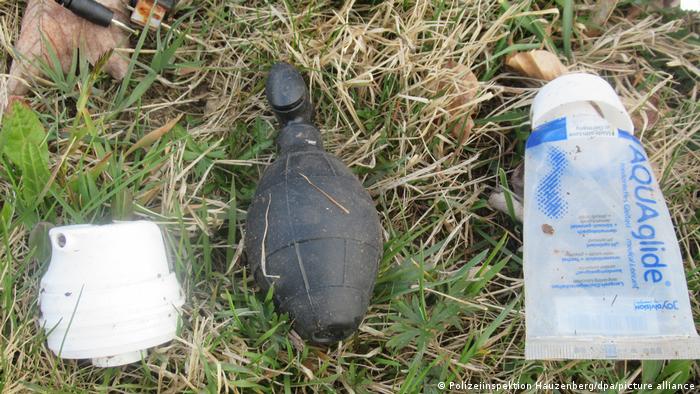 A woman who was out for a jog alerted police to a possible hand grenade in a bag, sparking a full-scale police bomb squad operation.

The detonation team that arrived at the scene in a forest near the Bavarian city of Passau, close to the Austrian border, eventually discovered that the object was actually a sex toy.

The woman had noticed the item in a transparent bag that also contained several other items, the Passauer Neue Presse newspaper reported on Tuesday.

Instead of having to carry out a controlled detonation, the police explosives team quickly gave the all-clear.

A close inspection revealed that the object was a dummy grenade made of rubber.

The presence of two unused condoms and an empty tube of lubricant in the bag, as well as a USB cable, provided a clue as to what it really was. Officers conducted a quick online investigation to test their theory.

"The search on the internet confirmed the suspicion," the police said in a press release. "There actually are sex toys in the shape of hand grenades, and that was the kind of thing we were dealing with here."

Based on the state of decomposition of the bag, officers deduced that the objects had been discarded a relatively long time ago.

"How these items got there and why they were left there can only be surmised," police said.

Germans and eroticism: It's complicated

Police in Bavaria are looking for a 2-meter wooden penis sculpture that has become a celebrated local landmark in recent years. The phallus landmark, the origins of which remain a mystery, disappeared over the weekend.

Unexploded ordnance in Germany - a legacy of the Allied Forces

Over 50,000 people were evacuated from the northern city of Hanover in May 2017, so that bombs from World War II could be defused. Even 72 years after the war ended, unexploded bombs are still found across the country.