Bassem Youssef stirs debate by equating Trump and Arab societies | News and current affairs from Germany and around the world | DW | 21.02.2017

In an interview with DW, the exiled Egyptian comedian said that when the Muslim and Arab world condemns Donald Trump, it should not ignore what is happening in their own countries. 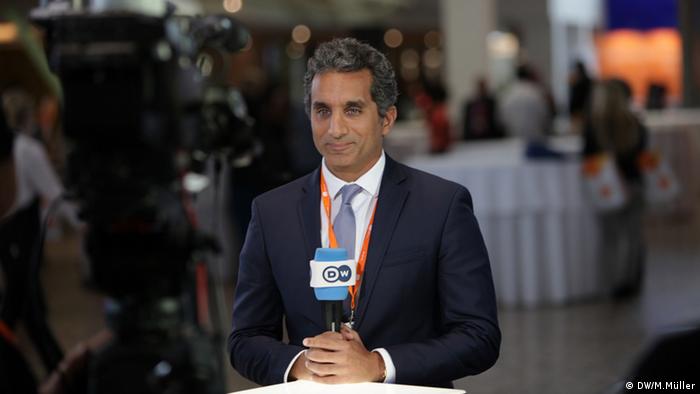 Exiled Egyptian comedian Bassem Youssef found himself at the center of a significant online backlash after his comments during an interview with DW triggered numerous and angry responses online from people in the Arab and Muslim world.

Speaking to DW's English News program ina segment recorded on February 15, Youssef was asked how he felt as a Muslim living in the United States with President Donald Trump’s hostile rhetoric towards Islam.

“We should not forget or ignore that we in the Arab world and the Muslim world have the same kind of rhetoric,” he responded, adding that “we are afraid that Trump will do to Muslims what many of the majority-Muslim countries do to non-Muslims.”

He went on to say that though he thought Trump is guilty of racism and discrimination against Muslims and other minorities, Arab and Muslim-majority countries had to “admit” that they are doing the “same thing for others.”

This 52-second snippet from a9-minute interview was shared on DW’s English social media platforms, where it got over 165 thousand views. It received 144 comments, most of which were critical of Youssef’s statements. He had made similar remarks on DW's Arab-langugae show Shabab Talk.

Simultaneously, some 1,300 people shared the article on their private pages, also writing critical comments: Ahmed S., a Facebook user based in Egypt, wrote in Arabic that Youssef’s words would serve as a “condemnation of Muslims as a whole.”

The criticism extended beyond Facebook, as users took to Twitter to voice their feelings about the remarks.

Yasmin Kafafi tweeted that racism in America and what Youssef said about the Arab and Muslim world could not simply be equated.

“We make fun of others, but this is not. Racism is what American has done with the Blacks (sic) before. They were forbidden. They were not even allowed to go to school or go on the same street with Whites,” she tweeted.

“I said this before and insist on it.”

Some comments did support Youssef’s remarks, however, or at least acknowledge some truth in them.

Among these, there were acknowledgements that racism is not unique either in the Arab and Muslim worlds, or in the West: When sharing DW News’ post on her own Facebook wall, Cairo-based Farah Ashraf commented that the comedian’s words did make her think that “we discriminate ‘the other’ regardless” of whom they are.

Other supportive users commented on the situation in Youssef's native Egypt. Some of them included people who said they belonged to the country's Coptic Christian minority, whom they feel is being oppressed.

One of them, Rosemary S., wrote that, following the bombing of a Church in Cairo in December 2016, she had been told to leave Egypt because "the country is for Muslims."

Wholly agreeing with the Egyptian comedian, Sheereen Seleman posted a tweet criticizing the entire Arab world: "Racism has become a way of life in Arab countries. Not only against different beliefs or other skin colors,” he wrote.

Bassem himself felt the need to discuss the strong reactions to his comments.

In a statement shared across his social platforms on February 19, he started by criticizing Donald Trump and accusing him of spreading a “racist atmosphere.”

However, he doubled down on his controversial remarks, writing that this was an example of the “double standards and hypocrisy” he had spoken about in the past.

He added that, though “we howl and cry when the Niqab or the Hijab is banned anywhere, or the construction of mosques is made more difficult […] At the same time it is normal that Bahai houses are burned or a house is set on fire just because a few Christians are praying or when churches are banned because the cross disturbs Muslims."

Founded in Iran in the 19th century, the Bahai is a small religious group which, despite taking inspiration from several religions including Islam, has often been portrayed negatively in Egypt. For a long time, its members were not eligible to receive identity cards in the country.

In his statement, Youssef went on to write that he would like to see how those Muslims who rejoice when they see images of other Muslims distributing the Koran in the streets of Berlin react when a Christian hands out Bibles in their own streets.

He concluded by calling his critics “hypocrites,” and accused them of using "freedom and secularism” in non-Muslim countries “to spread your religion, while at the same time you forbid this for others in your country.”

Egyptian authorities have raided and shuttered the Nadeem Center for the Rehabilitation of Victims of Violence and Torture in Cairo. The center had documented alleged human rights abuses and treated torture victims. (10.02.2017)

Now living in the US, the satirist is one of the best-known critical voices from the Arab world. On Tuesday, June 14, Bassem Youssef will attend the Global Media Forum in Bonn and give away one of “The Bobs Awards”. (13.06.2016)