Barbarossa, the red-bearded hero, a symbol of German unity

German Holy Roman Emperor Frederick I was a popular figure. His appeal only increased after his death, inspiring the legend of red-bearded Barbarossa. 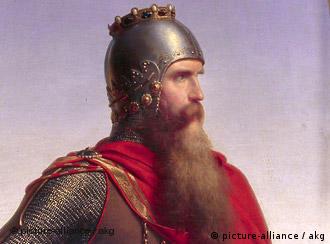 The date and location of the birth of Frederick I - commonly known as Barbarossa - are unknown, but he is remembered and honored as the most prominent German holy Roman emperor of the Middle Ages.

He died in Cilicia, which is now southern Turkey, by drowning in the Saleph River in 1190 during his third crusade, and has lived on in popular memory as "Barbarossa" ever since. Even today, legend has it that he is still sleeping in a cave in Thuringia's Kyffhäuser mountain range. A monument was erected there in the late 19th century and is now frequently visited by tourists.

Barbarossa means "red beard" - a name given to him by the Italians due to the reddish tone of his bushy beard. It is assumed that he was born in 1122. Germany in its modern form did not exist as a state at that time; instead there was a German emperor and many regional princes who were often at odds with one another. Under Barbarossa, the Holy Roman Empire of the German Nation spanned a vast region, stretching from the North Sea coast to Sicily, though not including the region around Rome. Barbarossa managed to keep the smaller and larger rulers within his territories in check. 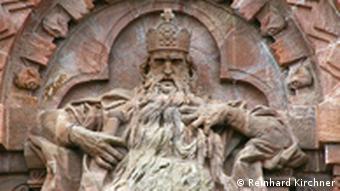 The Barbarossa monument is a tourist attraction

"The 100 years under the reign of the Staufer [dynasty of German kings] between the time Frederick I, alias Barbarossa, took office and the death of his grandson Frederick II - between 1152 and 1250 - was a relatively peaceful and happy time for the nation," explained Ralf Rödger, head of the Kyffhäuser memorial site.

This changed abruptly after the death of Friedrich II. The sovereign rulers of the empire's various regions quarreled over property rights. The empire was battered by wars and later by the Black Death pandemic that swept through Europe. These harsh circumstances created a longing among the people for the days of the bygone Staufer dynasty and the great red-bearded leader. After a few centuries of passing on his legend by word of mouth, Frederick I became commonly known as Barbarossa.

Putting a name to the legend

"In the evolution of the legend there was a transitional phase where it is not clear which Frederick was being spoken of: Frederick I - Barbarossa, or his grandson Frederick II," said Rödger.

It was not until the 16th century that the legend had become so elaborate that its pertinence to Frederick I became clear. It was essentially a reflection of the general population's attitude and desires. Then along came poets who took the story and embellished it further, helping to create the tale of the sleeping Barbarossa in the Kyffhäuser mountain cave, waiting for the right moment to return and unite Germany.

The Barbarossa cult became even more pronounced in the late 19th century and William I, the founder of the German Empire, is said to have benefited from the legacy of Frederick I. A statue of him on his horse now graces the same mountain in Kyffhäuser - and below is a stone figure of Barbarossa, complete with a meter-long beard. 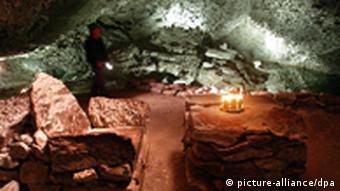 Is Barbarossa alseep in this case?

However, nobody knows whether Barbarossa ever even climbed this particular mountain. Before the erection of the William I monument, the focus was on a tower located 50 meters away and visible from a great distance. It was dubbed "Barbarossa Tower."

The popularity of the Barossa legend once again became evident when, in the 19th century, a spectacular gypsum cave was discovered a few kilometers from the monument.

"Barbarossa doesn't actually have anything to do with this cave," commented cave guide Ines Klemt. Nevertheless, it was named after him.

German pirate Störtebeker allegedly waged war on the rich and shared his loot with the poor. It's a legend that continues to inspire films, plays and outdoor festivals. (23.08.2011)

When it comes to Augustus II the Strong, separating legend from truth becomes tricky. But one thing is certain - the former king of Poland left a lasting mark on Dresden, where he was born. (23.08.2011)

Centuries later, there's still much to discover in Hildegard von Bingen's writings. How does the famous nun and mystic continue to influence life and medicine in Germany today? (24.08.2011)