Centuries later, there's still much to discover in Hildegard von Bingen's writings. How does the famous nun and mystic continue to influence life and medicine in Germany today? 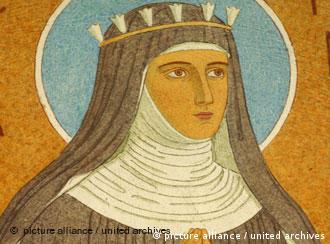 Hildegard von Bingen's soothing smile shines from the center of the picture in a waiting room. Angela Buchholz sits under the image, absently flipping through a magazine. She's at an alternative medicine clinic to have some blood work done, and she's looking forward to the procedure.

"Afterwards, I always feel great," she said. "I'm cheerful, relaxed and can concentrate better at work."

Hildegard von Bingen would have approved. The famous nun believed that bloodletting can strengthen the immune system and prevent inflammation, even though the practice has a rather bad reputation today. But there were conditions - the procedure should be performed six days after a full moon. The patient should have not eaten, and the doctor should only draw blood until it begins to take on a lighter color. 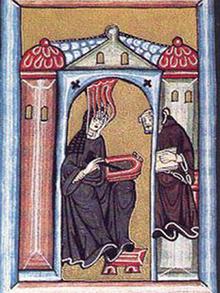 An illustration by Hildegard von Bingen shows her receiving a vision

"At first it sounds crazy," said Jutta Prinz, an alternative medicine practitioner, "because doctors are taught that blood is homogenous."

But Prinz believes the proof is in the pudding. She can see the color shift when she withdraws 50 to 200 mililiters.

"The patients confirm that Hildegard was right in her observations 800 years ago," Prinz said. "They get fewer colds and feel more at ease and able to focus."

Thus far, there's no scientific basis for concluding that drawing blood encourages the effects Prinz observes, and a placebo effect could be the best explanation. However, other methods Hildegard recommended are rooted in scientific fact.

Johannes Mayer, a head researcher at the University of Würzburg, pointed to Hildegard's recommendation to consume spelt, a type of wheat. Not only can it help with digestion, it contains tryptophan, which activates serotonin, a hormone that can positively affect mood. She was also right to point out that Galangal, used as a spice in Asian cooking, can help stop cramps. But her suggestions should be taken with a grain of salt, said Mayer.

"She often fails to suggest a dosage, and she was wrong about a number of plant materials," he said. For instance, it's best to disregard her recommendation to chew on poisonous lily of the valley to ease skin conditions. 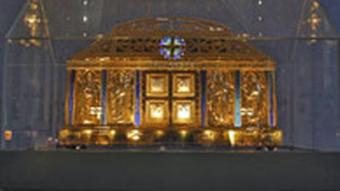 Hildegard's remains continue to draw pilgrims fascinated by her life

Nevertheless, the nun's extensive medical knowledge and ideas continue to astonish researchers. She took a holistic approach, despite living through an era marked by disgust for the body, crusades and struggles between the Pope and the German Emperor.

"Regardless of whether you look at her theological or medical writings, it's all about offering healing to people," noted Jutta Prinz.

Hildegard von Bingen owes much of her renown to her theological work. At the age of 43, the abbess began recording her thoughts and images of god - so-called visions - on paper. She became famous at once. Recognized by the Pope as a prophet, she served as a critical advisor for the rulers of her time. She even corresponded with German Emperor Friedrich Barbarossa. 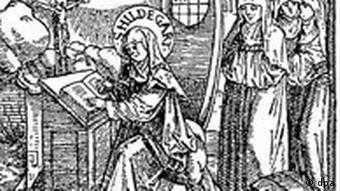 The celebrated nun's writings live on nearly a millennium later

Hildegard's accomplishments include founding two nunneries, serving as a leader for the religious community and writing 77 hymns, 200 recipes and continuing to record her visions through her death at age 81. Hailed as a folk hero after her death, her remains are preserved in a golden shrine in a church at Eibingen am Rhein, drawing pilgrims each year.

Today in Germany, her medical writings are arguably more well-known than her theological work, thanks to the Austrian doctor Gottfried Hertzka. He translated her recipes and tried them out himself, then distilled his experiments into a methodology he refers to as "Hildegard medicine."

That helps explain why Hildegard von Bingen smiles down at you in so many smaller clinical practices - not to mention health food stores and the like. She's even the face of a number of products, from granola to tea. But that goes a little too far for Jutta Prinz.

"The Hildegard medicine doesn't really use tea - most herbs are cooked in wine," she mused.

German pirate Störtebeker allegedly waged war on the rich and shared his loot with the poor. It's a legend that continues to inspire films, plays and outdoor festivals. (23.08.2011)

When it comes to Augustus II the Strong, separating legend from truth becomes tricky. But one thing is certain - the former king of Poland left a lasting mark on Dresden, where he was born. (23.08.2011)