German pirate Störtebeker allegedly waged war on the rich and shared his loot with the poor. It's a legend that continues to inspire films, plays and outdoor festivals. 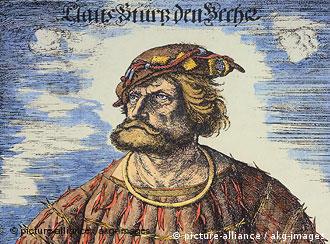 Does it matter who he really was?

It's a warm summer evening up north on the Baltic Sea island of Rügen. With the beach as a backdrop, performers on the huge stage celebrate the life of Klaus Störtebeker, German's most famous pirate.

The play is performed throughout the summer months and gives visitors a taste of the wrath of Störtebeker, a man who allegedly gave the Hanseatic League - an economic alliance that controlled trade along Europe's northern coast from the 13th to 17th centuries - a run for their money.

Around 150 actors, 30 horses, four ships, as well as fireworks and a continual onslaught of canon-booming help put on the show which some 6,000 people attend each summer night. The performances have been drawing tourists from across Europe for the past 20 years.

The stuff of legends 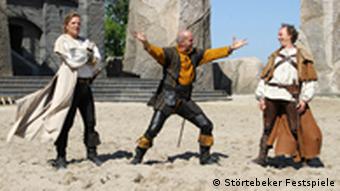 It's success lies in the mix of theater, show and special effects to tell the local legend, said festival director Peter Hick.

"People say Störtebeker was a mix of Robin Hood and Odysseus," noted Sascha Gluth, who plays Störtebeker. "Someone who was recalcitrant in the best sense of the word, but still had a sense of humor."

Separating truth from fiction is difficult - no one really knows if Störtebeker actually took from the rich to give to the poor, but he remains legendary nonetheless. He's a mascot in advertising campaigns galore all around the Baltic Sea region.

What is certain is that Störtebeker was born in Wismar in 1360, and hooked up with the Vitalien Brothers, a pirate syndicate that was regularly commissioned by various clients to rob ships in the Baltic Sea. "Customers" ranged from the Danish queen to the rulers of Mecklenburg to the chieftains of East Frisia. 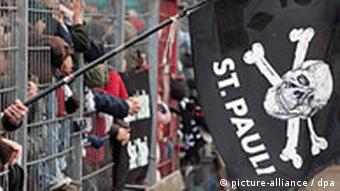 Störtebeker has even inspired soccer - here, a flag for the St. Pauli team

Historian Jörgen Bracker doesn't see anything heroic in thievery. He works at Hamburg's Municipal Museum and is one of the few experts in all things Störtebeker.

"These Vitalien Brothers divided up all their loot among themselves. They did not give it to anyone else," he stressed.

"People should surrender the notion that these men were willing to give up any of their booty," he added.

Either way, people love a legend, so the Störtebeker show will likely continue to captivate thousands each summer. Störteneker's death is all part of that legend, too. While the other Vitalien Brothers were executed in Hamburg, "there's no evidence that Störtebeker was among them," Bracker said.

Rumor has it that Störteneker was eventually tracked down by the Hanseatic League and beheaded, but his body - sans tête - was still able to run 12 meters before falling over.

Vikings and gardens on the Baltic Sea

The Schlei Inlet in northern Germany is a treat for all the senses when the rapeseed is in full blossom in May. Explore the historic coastal region with Discover Germany's video on demand. (16.05.2011)