Augustus II the Strong: A legend lives on in Dresden | Culture| Arts, music and lifestyle reporting from Germany | DW | 23.08.2011

When it comes to Augustus II the Strong, separating legend from truth becomes tricky. But one thing is certain - the former king of Poland left a lasting mark on Dresden, where he was born. 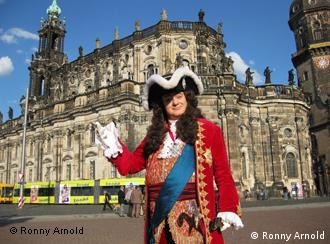 A countess stands in front of the Church of Our Lady in Dresden, ready to receive her noble guests - in this case, a group of German tourists eager to see the sights in Dresden.

"'Tis a pity, but our highness is indisposed - he has sent me in his stead," she explains once they arrive.

Of course, she's not a real noblewoman, but a tour guide dressed as Anna Maria Franziska von Brühl, the wife of Heinrich von Brühl. Her husband was one of the closest confidantes of Polish King Augustus II the Strong. After Augustus II's death, Heinrich von Brühl also swept up the financial disaster left behind by the ruler's wasteful ways.

The countess and the tourists greet each other with a gesture typical in the courts 300 years ago - a hastily learned bow - before toasting a glass of sparkling wine and heading off to view the Procession of Princes, a famous porcelain mural in the city. 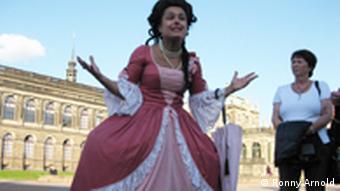 A group of tourists receive a noble welcome in Dresden

The group makes its way between horse-drawn carriages and other costumed tour guides, popular in Dresden with visitors who want to learn about the city's rich history, which Augustus II the Strong helped shape both architecturally and culturally.

Guides dressed as the former king himself are sure to catch eyes - along with actors who portray the other figures in his court, like Heinrich von Brühl and his wife, or Fatima, the Turkish mistress with whom the womanizing ruler fathered a number of children.

Today, the capital of the German state of Saxony lives from its reputation as a lovely throwback to the Baroque, a "Florence on the Elbe." And the city can thank Augustus II the Strong for its magnificent palaces, royal chapel and terraces along the Elbe River. Augustus II had a taste for art as well, collecting paintings and porcelain treasures, while inviting artists from across Europe to come to Saxony.

But the king with lavish tastes didn't stop in Dresden - surrounding forests are dotted with palaces he had built, and that means today's tours don't end in downtown Dresden either. A lovely Baroque palace situated on a lake in the village of Moritzburg is a favorite attraction. 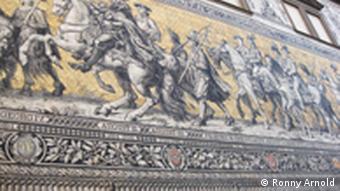 Actors posing as Augustus II are a sight to behold in Dresden. The standard costume involves a mountain of flowing locks, kingly robes and a physique that lives up to the ruler's nickname, Augustus the Strong.

"By the way, I wasn't called Augustus the Strong until after my death - by the Prussians," one costumed guide explained to some tourists.

One obligation of any Augustus II guide is to separate the many myths and legends about the Polish king from the truth. He did, indeed, break an iron horseshoe with his bare hands in front of a number of astonished onlookers - but, as tests on the broken horseshoe showed a few years ago, the iron was already brittle before his feat. 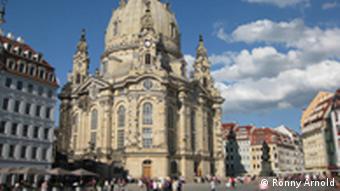 Augustus II's influence on Dresden's skyline continues into the present

Another rumor - that the king fathered well over 300 children - seems to be an exaggeration as well. There are only nine known children of Augustus II. But his nine progeny were born to six different women, suggesting that his reputation as a lady's man was probably more than just the stuff of legends.

"At big celebrations, he would drink up to seven bottles of Tokaji wine in a night - perhaps a reason why he was always the loser when it came to war," the tour guide continued.

Fortunately for Augustus II, it didn't take a war to earn the Polish crown. In 1697, the Polish nobility sought to name him their king, prompting Augustus II to make a quick conversion to Catholicism. His subjects in Saxony viewed the sudden switch with derision - along with the ruler's many bribes to diplomats and other officials.

Since then, the region has been steadfastly protestant. But Saxony can thank their former king for at least one thing - his conversion ushered in a policy of religious freedom in the area, even if unintentionally.