The impact of Nazi "cleansing" policies on Germany's opera houses and theaters has largely been left unstudied - until now. An in-depth look at persecution of artists, musicians and actors is on display in Dresden. 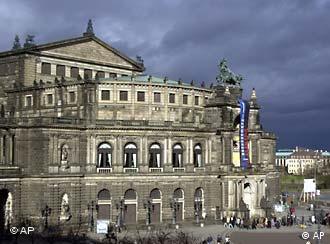 The Semperoper dismissed accomplished musicians for their opposition to the Nazis

"Decent behavior is even more important than making good music," Fritz Busch, a prominent conductor and musical director of the Saxon State Opera during his life, once said.

Busch was not a Jew, but he was opposed to Nazi ideology. This attitude resulted in his dismissal in 1933, five weeks after Hitler's rise to power. His story is one of the most well-known among 50 others that make up the current exhibition "Silenced Voices," which deals with the expulsion of Jews from the opera and theater scene between 1933 and 1945.

For the last five years, historian Hannes Heer and music scholar Jürgen Kesting have been dedicated to researching the project. Initially on the request of the Hamburger Abendblatt newspaper and the Hamburg State Opera, they started investigating the stories of Jewish and "politically untouchable" artists that worked in German theaters during the Third Reich. One of the sources of information they are using is biographies of prominent composers, conductors, directors and singers, as well as the stories of expulsion from various theaters. 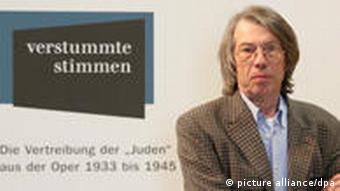 One part of the exhibition documents the fate of 44 prominent composers, directors, singers, and actors - the victims of racist Nazi politics. Another section specifically deals with the expulsion of members of the Semperoper and the Dresden State Theater. A labyrinth of columns and billboards in the foyers of both houses helps to emphasize the dismal nature of these people's fates. Descriptions and photos present well-known and not-so-well-known artists, choir and orchestra members, artisans and stagehands. Visitors can also listen to musical extracts.

The 'threat' of contemporary art

In a detailed catalog, Hannes Heer discusses the source of anti-Jewish sentiments in Germany after 1918. The German Empire had gone through a political change following World War 1, when it became a federal republic. At this time, German culture - described by some as the best and the most beautiful of all - was seen as the only unifying aspect that could be used to forge a new national identity. This automatically excluded all modern artistic movements, which in turn forced theaters to give up on artistic experiments and contemporary works. The new, compulsory focus was on the canons of culture.

One of the goals of this national stance was to convey the message that it was Jews who were to blame for the revolution, for the defeat in World War II and for economic troubles. A "security scale" was devised with regard to theaters and operas, indicating which institutions had the most subversive tendencies. Berlin was at the top of the list, as it was traditionally open to all modern influences, but avant-garde theaters such as those in Leipzig and Darmstadt were also being monitored.

The propaganda was spread in a very direct manner, including methods like stink bombs and chanting to prevent certain performances from taking place. There were also press campaigns against specific individuals, as well as those that called for the resignation of certain directors and those that aimed to influence operatic and theatrical repertoires. 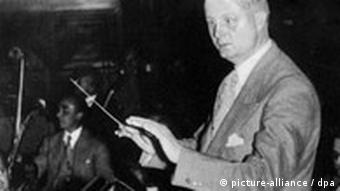 Although not Jewish, Fritz Busch was forced out of his job

Hannes Heer and Jürgen Kesting have made an important step forward in their research work in Dresden. For the first time, documents have been uncovered that prove that prisoners of war had worked at the opera house.

"We have made quite a sensational discovery in Dresden," said Heer. "It is personal journals that contain names and where people came from. From 1941 onwards, a large number of musicians and stagehands were foreign workers."

The Semperoper and Dresden State Theater invite visitors to discover the context of the historical events connected with the expulsion of Jews from the city's cultural scene. Lectures, films and cultural presentations complete the program on offer. A CD documentary gives the sound back to those "silenced voices."

The voice of Fritz Busch was never fully silenced, however. After his dismissal from the Semperoper he went on to work in South America, Scandinavia, England and New York. In 1935, he wrote in a letter to the mother of his deceased friend Max Reger: "What counts is that today I can make the most beautiful music and have remained a free person and can serve my fatherland better in this way than in others."

The "Silenced Voices" exhibition runs at the Semperoper and the Dresden State Theater until July 13.

Texas project uncovers works by composers persecuted by the Nazis

The Nazis were responsible for the persecution or murder of numerous composers, resulting in the loss of many of their musical works. Now, a project in Texas is unearthing some of those compositions. (22.03.2011)