February 22 marks the anniversary of the execution of Hans and Sophie Scholl, key members of the anti-Nazi resistance group, White Rose. Though their lives were tragically short, their influence spanned across Germany. 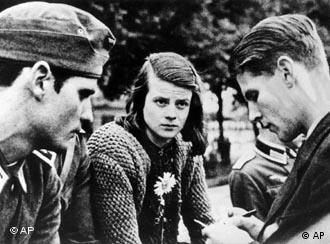 Hans and Sophie Scholl are among those most closely associated with the anti-Hitler movement in Nazi Germany. The young siblings from Munich were part the White Rose, a resistance group committed to non-violence. From June 1942 to February 1943, they secretly printed anti-war leaflets with slogans like "Down with Hitler!" and "Freedom!" which they distributed to the public.

On February 22, 1943 Hans and Sophie were executed for their anti-regime activities. News about the courageous acts of the White Rose had already spread through Germany during World War II, which did not end until 1945.

The group has been praised by many prominent personalities, including anti-fascist German novelist and Nobel Prize-winner Thomas Mann. To this day, the White Rose stands for courage, bravery and political responsibility.

Speaking to the conscience

"Do you and your children want to suffer the same fate that befell the Jews?" asks the fifth and second-to-last White Rose leaflet, which was written shortly before the group's arrest by the Gestapo on February 18, 1943.

"Do you want to be judged in the same way as your abusers?" continues the leaflet. "Should we forever be the people hated and rejected by the whole world? No! So distance yourselves from the National Socialist subhumanness! Tear off the coat of indifference that covers your heart! Make a decision before it's too late!" 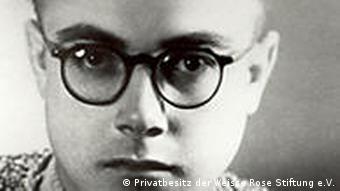 Franz Josef Müller was also devoted to the resistance

Franz Josef Müller, now 86, was a member of the White Rose. As a 17-year-old, he protested together with Hans and Sophie Scholl, Alexander Schmorell, Christoph Probst, Willi Graf and university professor Kurt Huber against the crimes of the Nazi regime. They appealed to the German public to join them in passive resistance.

"Naturally, it was a great pleasure to send our leaflet to the Nazi district leader," recalled Müller with a smirk. "After all, we asked for the leaflet to be passed on to others. This was youthful foolishness, since death was just around the corner."

It is less well known that the activities of the White Rose beyond just Munich in southern Germany, reaching all the way to Hamburg in the north. A series of informative events titled "Hamburg and the White Rose" is now raising awareness about the scope of their influence, organized by Körber Foundation and White Rose Foundation. The program includes lectures, city tours and exhibitions.

Most of the Hamburg-based White Rose members had an academic background. They included a group of students from the progressive Lichtberg-Gymnasium high school, who later joined with university students. Other supporters included artists, jazz and swing lovers, and medical students. An important meeting point for all these people was the bookshop Agentur des Rauhen Hauses, where forbidden literature was distributed. 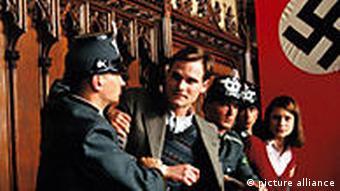 Many White Rose members were sentenced to death

The Hamburg exhibition devotes a special section to Traute Lafrenz. A medical student in the early 1940s, she helped deliver White Rose leaflets from Munich to Hamburg, where they were to be distributed. She was arrested by the Gestapo and later freed by American soldiers. After the war, she immigrated to the United States, where she worked as the director of an institution for mentally handicapped children.

Lafrenz, now aged 91, was not the only Hamburg resident arrested due to connections with the White Rose - over 30 others suffered the same fate. Eight of them did not survive the prosecution, including Hans Conrad Leipelt who had helped Lafrenz transport the leaflets. Many of the accused were demonstratively tried for high treason at the so-called People's Court and sentenced to death.

Thanks to errors in the investigation process, Franz Josef Müller received "only" a jail sentence. After the war he studied law and became a teacher. Since the 1970s, he has been active in sharing his experiences with the White Rose movement. He co-founded the White Rose Foundation in 1987 and was its chairperson until 2004.

"As the White Rose, our aim back then was to reach people with arguments, with sophisticated language," said Müller. "There was something noble about this group."

The German parliament backs plans for a national day of remembrance for Germans expelled from Eastern Europe when frontiers were redrawn after World War II. Many Historians, however, are crying foul. (16.02.2011)

The Simon Wiesenthal Center has awarded Germany a top grade for its efforts to prosecute Nazi war criminals. The number of ongoing investigations into former Nazis has increased both in Germany and elsewhere. (13.01.2011)