A German woman sued her bank after it refused to call her "Kundin" (female customer) rather than "Kunde" (male customer). But Germany's highest civil court has said the bank did not discriminate against her. 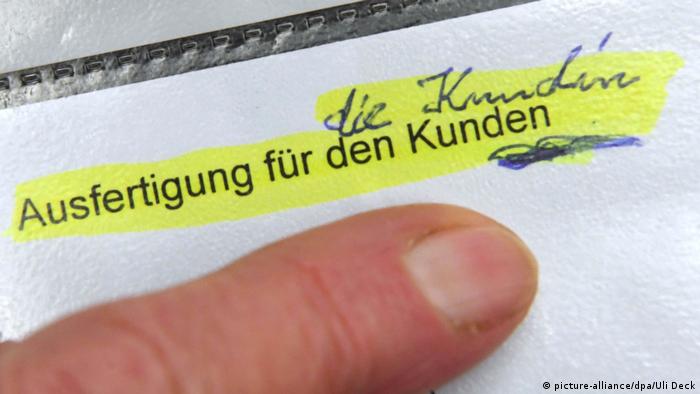 Germany's Federal Court of Justice (BGH) on Tuesday rejected an appeal by an 80-year-old German woman who had sued her bank for failing to address her with female versions of common titles.

Plaintiff Marlies Krämer has pledged to take the case to Germany's constitutional court and, if necessary, to the European Court of Justice (ECJ).

Why this matters: Feminists in Germany have criticized the German language for what they say are the subtle ways in which it discriminates against women. In response, some linguists have called for officials and the public to use female versions of common titles when referring to women. But the use of female forms is controversial. Some critics have denounced the linguistic changes as extreme "political correctness," while others have said they create awkward formulations.

Read more: A sea of pink hats and protest signs at the Frankfurt Women's March

How do you feminize a male title in German? The German language allows a speaker to create the female form of many titles by adding "-in" on the end of male words. Examples include: "Richter" (male judge) and "Richterin" (female judge), "Kampfpilot" (male fighter pilot) and "Kampfpilotin" (female fighter pilot), and "Nuklearwissenschaftler" (male nuclear scientist) and "Nuklearwissenschaftlerin" (female nuclear scientist).

Who is Marlies Krämer? Krämer is a veteran of legal fights over the German language. She refused to own a passport in the 1990s until she was allowed to sign it as the document's "Inhaberin" (female owner) rather than its "Inhaber" (male owner). She later succeeded in collecting enough signatures to convince meteorologists to also use female names for high pressure weather patterns. They had previously only used female names for low pressure weather patterns.

What happens next? Krämer said she would appeal Tuesday's verdict at Germany's constitutional court and, if that fails, appeal to the highest EU court, the ECJ.