Bangladesh: Who killed Rohingya leader Mohibullah? | Asia | An in-depth look at news from across the continent | DW | 05.10.2021

The murder of a top Rohingya leader in his office has international leaders calling for an investigation and has stoked anger within Bangladesh's Rohingya refugee communities. 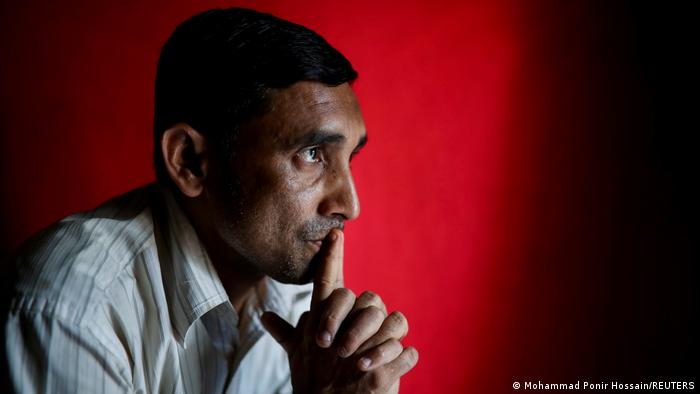 Some have blamed the Arakan Rohingya Salvation Army for Mohibullah's death

Mohibullah, a high-profile figurehead for the Rohingya who have fled Myanmar, was killed by unidentified gunmen last week in an event that has left investigators looking for a culprit.

Mohibullah was shot last Wednesday, September 29, in one of the sprawling camps in the coastal Bangladeshi city of Cox's Bazar. The leader left for Bangladesh when over 730,000 Rohingya Muslims fled Myanmar after a military crackdown in August 2017, in the largest Rohingya exodus to date.

Mohibullah, who was known as a teacher in the refugee community, came to prominence after going from hut to hut in the camps, collecting evidence of abuses against Rohingya in Myanmar, including mass killings and gang rapes. He also shared his evidence with international investigators.

He additionally spoke at the White House with former US President Donald Trump and the UN Human Rights Council in past years, asking for leaders to give Rohingya more of a voice in their future.

"He gave us hope of a dignified return to Myanmar, with our rights ensured. We were becoming united under his leadership," Nur Alam, a refugee at the Lambasia Rohingya camp, told DW on Monday.

"The rights include Myanmar citizenship as well as safety and security in the region that we were forced to leave," said Nur Alam, who came to Bangladesh in 2017.

Several witnesses to the shooting

Mohibullah had expressed his gratitude toward the Bangladesh government for sheltering the Rohingya and publicly pledged to return home with fellow refugees as soon they received the rights they were demanding. He was killed late in the day after returning to his office following evening prayer.

"He was talking to eight to 10 elderly Rohingya refugees about the price hike and the amount of rations they receive regularly. Suddenly, six killers came inside the office, and one of them shot Mohibullah three times," an eyewitness, who wished to remain anonymous, told DW.

"The killers were wearing three-quarter pants, T-shirts as well as masks, and Mohibullah was shot from above his head," said the witness, who added that he was frightened by the situation and went into hiding a few days after the incident.

"The leader was able to look at the killer while he was being shot," he said.

The witness, who lives near the office of Mohibullah, recalled that the leader was able to stand up, even after he was shot three times.

"At that point, another killer, whose long hair was tied from behind, shot at Mohibullah's eye and chest to ensure his death," he said.

"Had he not tried to stand up, he could have saved his own life. Everything happened within three minutes, and the killers left the spot without facing any resistance from anyone."

Meanwhile, Bangladesh's Foreign Minister Abdul Momen said in a statement that "vested" interests were responsible for the killing, as Mohibullah had wanted to return to Myanmar.

"The killers of Mohibullah must be brought to justice," said Momen.

UN High Commissioner for Human Rights Michelle Bachelet and many other international bodies have also called for a "prompt, thorough, and independent investigation" into the killing.

Although the Rohingya refugee camps are known for being overpopulated and chaotic, Mohibullah's office was situated in a relatively organized camp called Lambasia, which is also within a few hundred feet of two police stations.

Experts think that security forces failed to protect the Rohingya leader despite knowing that his life was at risk. He had received several death threats in the past, especially following a gathering of more than 200,000 refugees in Cox’s Bazar to observe the Rohingya Genocide Remembrance Day on August 25, 2019.

While Mohibullah organized it with clear permission from the authorities under the banner of his organization, the Arakan Rohingya Society for Peace and Human Rights (ARSPH), the demonstration alarmed many groups both within and outside of the camps, who considered him to be a threat due to his influence over the refugees.

In an interview with Reuters in 2019, the influential leader himself predicted that he would be killed by the hard-liners who regularly sent him death threats.

"If suddenly there's an 'accident,' no problem. Every community worker gives his life at last," Mohibullah told Reuters.

"Not only Bangladeshi security forces but also the UN and foreign embassies in the country failed to protect Mohibullah," Nay San Lwin, a co-founder of the Free Rohingya Coalition, told DW.

"If he had been offered a safe house somewhere, he wouldn't have been killed."

However, Cox's Bazar's police chief, Md Hasanuzzaman, claimed the Rohingya leader "had never asked for security" and that police "hadn’t suspected any threat" to his life.,

Six Rohingya men have been arrested so far over the killing of Mohibullah, according to police, who were also probing links to a militant group called the Arakan Rohingya Salvation Army (ARSA). ARSA has, however, denied any responsibility for the murder.

Immediately after the murder of the Rohingya leader, a video went viral on Facebook in which Habibullah, a brother of Mohibullah, blamed ARSA.

The militant group had also reportedly attacked Myanmar’s security checkpoints in 2017 in Rakhine State, which ignited a mass Rohingya exodus following a military crackdown in the region.

Habibullah has remained unreachable since posting the video. Meanwhile, ARSA condemned the murder and blamed "transnational border-based criminals" for it in a statement.

Experts believe Mohibullah's nonviolent and democratic approach to solving the Rohingya crisis angered groups that were keen on maintaining armed resistance as an option to solve the crisis.

Nur Khan, a prominent human rights activist who was in close contact with Mohibullah over the past few years, told DW that the murder was part of a big plan to leave the Rohingya community without a civilian leader.

"You can’t solve a political problem only militarily. That’s why a leader like Mohibullah, who emerged from a civilian community, was important to solving the crisis," Khan told DW.

"However, his killing has destroyed the possibility of such a solution to the problem. It's not a small thing, rather a part of a big plan," he stressed.

Abdur Rahman contributed to this report.