The huge blaze razed around 2,000 tin shacks in a crowded Dhaka slum, making at least 3,000 people homeless. In the Bangladeshi capital, fires are frequent — and many a time deadly — due to lax safety measures. 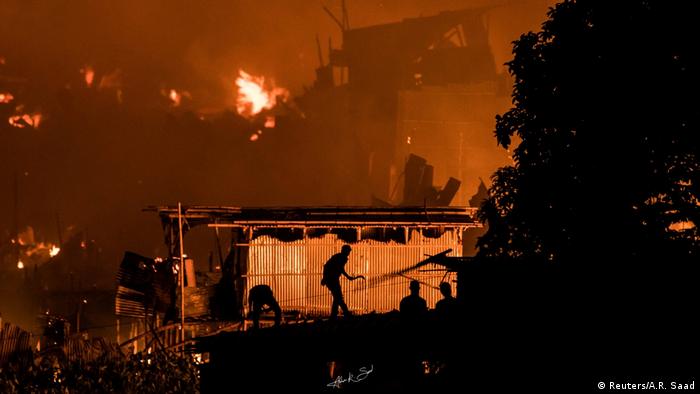 A massive fire swept through a crowded residential area in Dhaka, destroying thousands of shanties, Bangladeshi officials said on Sunday.

The fire broke out in the Mirpur neighborhood late on Friday, with authorities managing to get the blaze under control on Saturday. Several people have been injured but no deaths have been reported.

"I could not salvage a single thing. I don't know what I will do," Abdul Hamid, a 58-year-old tea seller in the slum, told AFP news agency.

Officials say that many residents — largely low-income garment factory workers — were not in the slum when the fire broke out, as they had left their homes to visit their families in other parts of the country on the Muslim Eid festival.

"Otherwise, the damage would have been bigger," local police chief Golam Rabbani said. 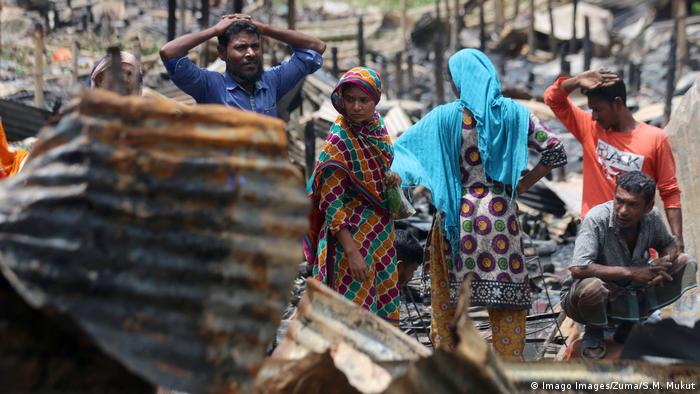 Slum residents could not salvage a thing due to the fire

Fire services official Ershad Hossain said that around 10,000 people have taken shelter in makeshift camps in nearby school grounds.

Fires in residential areas are quite frequent in the South Asian country. Experts blame lax safety measures for these accidents.

Building fires in Dhaka have killed at least 100 people so far this year.

In March, a massive fire inside the 22-story FR Tower in Dhaka's Banani area left a number of people dead. A month earlier, at least 70 people were killed after a fire broke out in an apartment building that was reportedly also used as a chemicals warehouse. The blaze also spread to nearby buildings.

At least 112 workers were killed in a fire at the nine-story Tazreen Fashion factory in the outskirts of Dhaka on November 24, 2012. An investigation later found it was caused by arson and that managers at the Ashulia district plant had locked the gates to prevent victims from getting out.

Bangladesh's deadliest industrial blaze to date tore through one of Dhaka's most densely populated areas on June 3, 2010, killing 117 people. A number of multistory apartment buildings and shops in the Nimtoli district went up in flames after an electrical transformer exploded.

Arrest warrants have been issued in Bangladesh for two owners and four employees of a garment factory where 111 workers died in a fire last year. The six fled after police filed homicide charges against them. (31.12.2013)

John Bolton, former National Security Advisor for Donald Trump, calls for the fall of the Iranian regime in DW interview 44m ago