Sex workers in Bangladesh often do not get a proper burial due to social stigma. This week's burial has been met with praise by human rights activists. 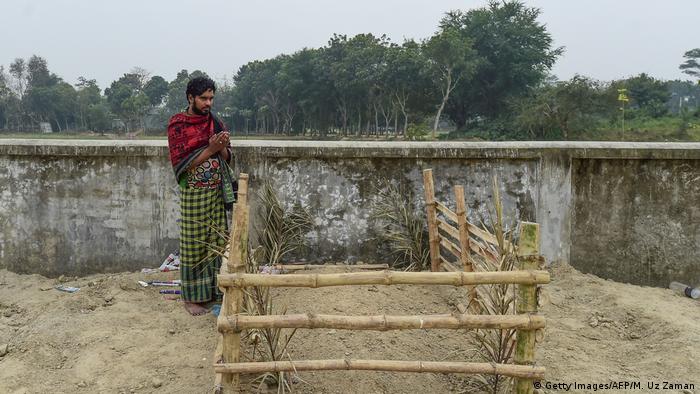 Hamida Begum, who died earlier this week, may be the first sex worker to receive a proper Islamic funeral. The 67-year-old was given a Janaza (funeral prayer) by an imam after local police intervened to ensure a proper burial.

Bangladesh is one of the very few Islamic nations to legalize prostitution. But bodies of sex workers are often buried in unnamed graves, or their bodies are dumped.

Due to the social stigma, religious heads such as imams usually shy away from performing funeral rites for sex workers.

The latest burial was hailed by many activists as a landmark. Around 400 people reportedly showed up to pay their respects to Hamida Begum in post-funeral prayers. She leaves behind her son Mukul Sheikh, and daughter Laxmi, who is also in the same profession.

"I never dreamed that she would get such an honorable farewell. My mother was treated like a human being," Laxmi told The Dhaka Tribune.

Hamida Begum worked at Daulatdia in Rajbari district, one of the world's biggest brothels. Established during British colonial rule, it is now one of the 12 major legal brothels in Bangladesh. The imam was initially reluctant to lead the prayers, but later agreed after a coalition of sex workers, backed by local police, urged him to do so.

Jhumur Begum, the leader of the coalition of sex workers was at the forefront of the campaign to get Hamida Begum this farewell. "If we wanted to bury our dead in the morning, villagers would chase us with sticks. We have finally received our rights as humans, citizens of this country, and parts of this society," she told the AFP news agency.

Despite this instance of a respectable funeral, living conditions for sex workers in the South Asian nation are far from optimal. Many minor girls are sold into prostitution by poor families. Hamida Begum herself was only 12 years old when she started working at the Daulatdia brothel. Women and girls working as prostitutes often have to face harsh work conditions, and are at high risk for HIV and other sexually transmitted diseases.

Hundreds of Bangladeshi women working as domestic helps in Saudi households have accused their employers of committing severe physical, mental and sexual abuses. DW spoke to some of the women about their plight. (07.09.2018)

Most of the 15 million sex workers in India live an isolated life, full of violence and dejection. But they have been given a voice and identity by a recently-founded newspaper. It has been welcomed by many but has also met with harsh reactions. (05.06.2008)

For generations, prostitution has provided the only means of economic survival for some tribes in the Indian desert. Now, a handful of schools teach kids that a life outside the sex industry is possible. (06.05.2011)