Steroid usage among Bangladesh′s prostitutes worries health activists | Asia | An in-depth look at news from across the continent | DW | 20.03.2012

Prostitutes in a slum in Bangladesh's capital, Dhaka, often use steroids to appear "healthier" and snag clients. Aid activists complain about the rampant use of these drugs, which could be lethal if consumed for long. 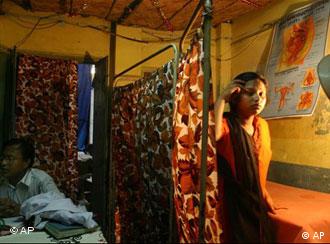 There is no shortage of men looking for "company" in Kandapara slum, a labyrinth of tiny lanes, located a few hours drive northeast of Bangladesh's capital, Dhaka. But with rates as low as 50 taka (around 0.60 dollar cents), the need to attract as many customers as possible is great, prompting a rising, trend of steroid abuse among adolescent sex workers to "enhance" their appearance.

"There is a huge difference between my appearance now and the malnourished look of my childhood," says Hashi, a 17-year-old who was lured into the sex trade 10 years ago. Hashi is one of around 900 sex workers - some as young as 12. She started taking steroids soon after entering the profession. "I am healthier than before and fit to serve a lot of customers in a day. Sometimes up to 15," she says.

Also known as Dexamethasone, Oradexon treats inflammation and allergies in humans and is used by farmers to fatten livestock. Charities say the over-the-counter drug is taken by 90 percent of sex workers in Kandapara and the other 14 legalised brothels across the impoverished South Asian nation.

The girls are first forced to take it by their madams, or "sardarnis", who run the brothels. It increases their appetite, making them gain weight rapidly and giving the appearance that these poorly nourished teens are in fact healthy and older. It also helps sardarnis keep the police away. The legal age for sex work in Bangladesh is 18. The girls then continue to consume it, saying that it keeps them "strong and healthy", which in turn will help them get more clients in a day so they can earn enough to survive. 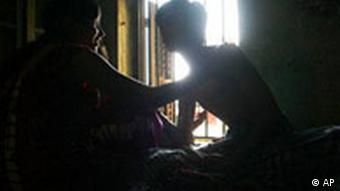 Oradexon, they say, keeps them going, even though there are known risks associated with its long-term use. The steroid can cause diabetes, high blood pressure, skin rashes and headaches and is highly addictive, according to social activists. It also weakens the immune system and leaves patients more susceptible to illnesses. There have been reports of young sex workers dying from drug overdose.

"Steroids are life-saving as well as life-destroying drugs which are used by sex workers in poor countries," said Shipra Gowshami, a lawyer and human rights activist who works with sex workers in brothels in the central Bangladeshi town of Faridpur. "A lack of awareness, easy availability and malpractices of quacks are some of the prime causes of why these drugs are being abused," Gowshami said.

In 2010, ActionAid Bangladesh began a campaign to promote awareness of the drug among sex workers. But they say they are facing a long fight in persuading not only the brothels to stop using it but also authorities to regulate it. "There have been attempts to raise awareness on the negative impact of the use of such drugs but brothel owners, madams and pimps are a long way from withdrawing such practices," said Farah Kabir, country director for ActionAid Bangladesh. "We have an uphill battle, yet it can be won. There needs to be greater regulation in the sale of such drugs. The government and the state must play an active role."

According to a centuries-old custom in Pakistan, men and women are killed with a sense of righteous pride for allegedly establishing "illicit" relationships. (20.03.2012)

Pakistani authorities have brought charges against the three widows of Osama bin Laden, saying they entered and are living in the country illegally. (08.03.2012)