Police in Bangladesh say they have arrested a suspected Islamist militant over the murder of two gay activists. The country has seen a recent spate of deadly hacking attacks widely blamed on Islamic extremists. 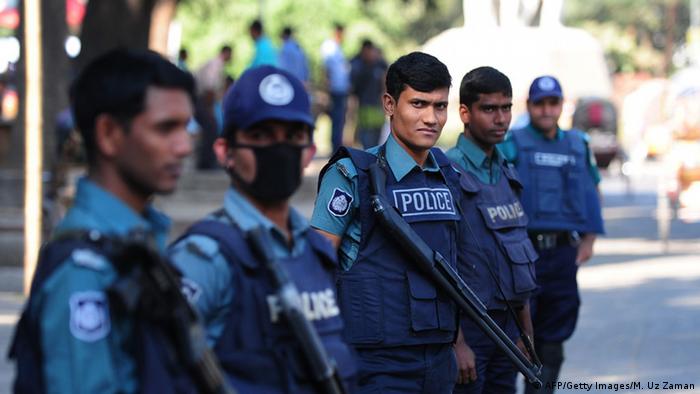 Bangladesh police said Sunday they had arrested a member of a local Islamist group in connection with the murders of Xulhaz Mannan and Mahbub Tonoy in an apartment in the capital, Dhaka, last month.

Police spokesman Maruf Hossain Sorder told the AFP news agency that the 37-year-old man was a member of the Ansarullah Bangla Team, an outfit that has been blamed for a series of similar murders of intellectuals, writers and religious minorities. Several members of the team were convicted last year over the 2013 murder of atheist blogger Ahmed Rajib Haider.

The man, named as Shariful Islam Sihab, has denied carrying out the murders, but reportedly owned one of two guns used in the killings, according to police. They said he had admitted supplying arms for use in the attacks.

A Hindu man has been murdered on the street in Bangladesh. The death of the 50-year-old tailor is the most recent amid a spate of hacking attacks against minorities in the deeply conservative Muslim nation. (30.04.2016)

Rights groups have urged the Bangladeshi government to do more to stop the killings of secular activists by Islamist militants. Unknown assailants burst in and hacked two men to death in a Dhaka apartment on Monday. (26.04.2016)

Mannan, who worked for US government aid organization USAID, and his friend Tonoy were killed by some six men carrying machetes and guns on April 25. Both men had received threats from Islamists over their campaign for gay rights.

Mannan was the editor of a magazine for Bangladesh's gay and lesbian community, and Tonoy was a theater activist.

The arrest of the suspect in the western district of Kushtia comes after an elderly Buddhist monk was found hacked to death on Saturdayin a temple, the seventh such killing since the start of April.

Islamist militants have been blamed or claimed responsibility for the many killings carried out since last year, with secular bloggers, Christians, Hindus, and Sufi, Ahmadi and Shiite Muslims being fatally hacked or shot.

The jihadist group "Islamic State" has claimed a number of the killings, but authorities say there are no indications that the group is active in Bangladesh.

Another extremist group, Al Qaeda in the Indian Subcontinent (AQIS), has said it was behind the killings of Mannan and Tonoy, whom it accused of working to "promote homosexuality" in Bangladesh with the aid of the "US crusaders" and Indian allies. Homosexuality is illegal in the country.

Police have, however, cast doubt on the claim, saying the murders bear the stamp of homegrown Islamists.

Only one of 15 such killings has been prosecuted since 2013.

Syria used chemical weapons on civilians in 2018: OPCW 32m ago

Myanmar: Aung San Suu Kyi may be unaware of unrest amid additional charge 1h ago