An LGBT activist was among two people hacked to death in Dhaka, according to Bangladesh police. The gay rights advocate had also been working for the US embassy in the Asian country. 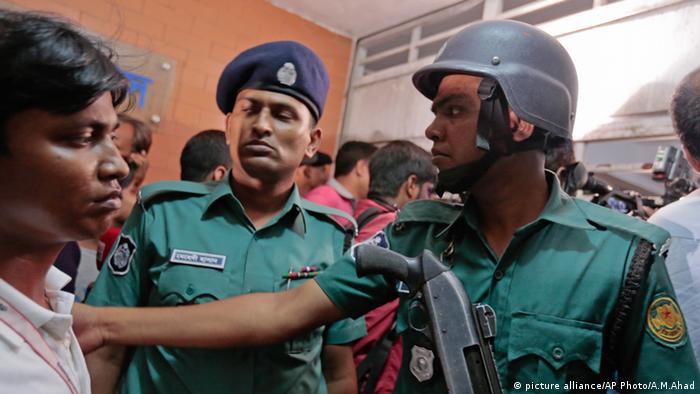 Authorities identified one of the victims as Xulhaz Mannan, the editor of transgender magazine "Rupban," which is the country's only magazine aimed at an LGBT audience.


The US ambassador to Bangladesh, Marcia Bernicat, condemned the murders, saying that the activist was working for the US embassy in Dhaka.

"I am devastated by the brutal murder of Xulhaz Mannan and another young Bangladeshi," she said.

"We abhor this senseless act of violence and urge the Government of Bangladesh in the strongest terms to apprehend the criminals behind these murders," she added.

Monday's attack appears to be the latest installment in a series of brutal attacks on activists, bloggers and intellectuals in Bangladesh.

Following the murders, Amnesty International accused authorities of "harassing" the nation's LGBT community, instead of protecting them.

"The brutal killing today of an editor of an LGBTI publication and his friend […] underscores the appalling lack of protection being afforded to a range of peaceful activists in the country," said Champa Patel, Amnesty International’s South Asia director.

"There have been four deplorable killings so far this month alone," she added. "It is shocking that no one has been held to account for these horrific attacks and that almost no protection has been given to threatened members of civil society."

Homosexual relations are illegal in Bangladesh. Many LGBT activists have been forced to leave the country.

Mannan was killed when several people entered his apartment in Dhaka posing as couriers, a police official said. The attacker used sharp weapons, he added.

Earlier this month, the LGBT activist complained of online threats from Islamists. Mannan was also one of the organizers of the annual Rainbow Rally, set for April 14, but the police canceled the pro-LGBT gathering due to safety concerns.

On Saturday, Islamist militants hacked a liberal professor to death in the northwestern city on Rajshahi, in an attack claimed by the "Islamic State" (IS) group.

IS said that professor Rezaul Karim Siddique was killed for "calling for atheism" in the Muslim-majority country. However, the Dhaka government disputed this account, blaming "local militants" instead.

As a sexual minority within a conservative religion, LGBT+ Muslims in South Asia are supporting each other on social media platforms in a climate of fear and discrimination.

From Bangladesh to Germany: How political refugee built a new life in Düren 31.08.2020

Bangladesh is his motherland, Germany his fatherland. After receiving death threats, former blogger Mahmudul Haque Munshi tells DW how he overcame death threats and his deepest fears and started a new life in Germany.