Refugee rights activists say Bangladesh is acting against international humanitarian law in turning back Rohingya refugees from Myanmar. However, Dhaka says it is doing nothing wrong and must put its own people first. 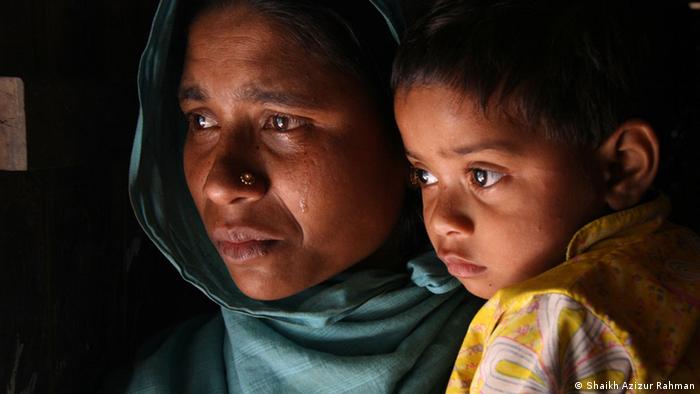 Ignoring appeals from international community, Bangladesh is sticking to its stand not to allow any Rohingya refugee inside its territory as every week boatloads of Rohingyas are seeking to flee Myanmar.

The ethnic violence that broke out in Arakan state in Myanmar last month is continuing. Earlier this month, US-based Human Rights Watch reported that Myanmar's security forces were indulging in mass arrest and the use of unlawful force against the Rohingyas.

In the past six weeks more than 1,300 Rohingya men, women and children sought to cross over to Bangladesh.

Little more than a hundred of the Rohingyas managed to sneak into Bangladesh in the first couple days after violence broke out in Myanmar. But, despite their fervent appeals seeking refuge in Bangladesh, the remaining Rohingyas keep being turned back.

"Boatloads of Rohingyas from Myanmar are arriving every week. Through many points on our border they are attempting to sneak in," Lt. Col. Zahid Hassan, a border guard commander in Cox's Bazar said. "We are not allowing any of them to enter Bangladesh." 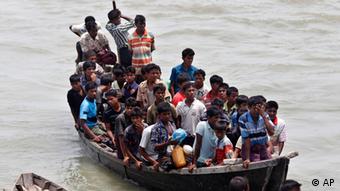 Although boatloads of refugees may arrive in Bangladesh, they are constantly turned away

Bangladesh's foreign minister, Dipu Moni, said that her already poor and densely populated country is facing many crises with the Rohingya refugees. "In no situation we can take any extra load of Rohingya refugees which could worsen our problems here," said Moni.

After a widespread ethnic conflict in Myanmar in 1978, thousands of Rohingyas fled to Bangladesh from Myanmar.

After Myanmar stripped the Rohingyas of citizenship and identified them as illegal immigrants from Bangladesh, more Rohingyas began fleeing Myanmar.

In 1991, following alleged persecution by military junta in another wave tens of thousands of Rohingyas crossed over to Bangladesh. Bangladesh stopped granting Rohingyas refugee status in 1992.

But the trickle from across the border continued, resulting in the number of Rohingya refugees reaching 300,000 in Bangladesh. While 28,000 of them live in two UNHCR-sponsored camps, others live as illegal refugees in numerous decrepit camps scattered across south eastern Bangladesh.

In the illegal Rohingya colonies where electricity and sanitation facilities are absent, the refugees live in extreme poverty. In over-populated and poverty-stricken Bangladesh, local people do not welcome the Rohingyas.

The refugees are draining the local resources and it is resulting in increased poverty among local people, many allege. 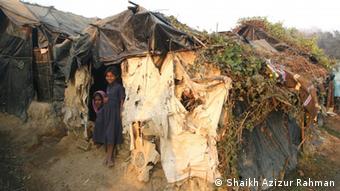 "The Rohingyas are ready to work at a very low wage. So the local people are angry as their jobs are being taken away by the refugees," said Jasimuddin, a police officer in Cox's Bazar district, where most Rohingya refugees live.

In 2009 Bangladesh began a crackdown on illegal Rohingyas living in the country. Many were arrested and sent to jail on charges of illegal infiltration. Many illegal Rohingyas have been forced to return to Myanmar in a formal "push-back" process by Bangladesh.

In 2010 a UN Joint Initiative [UNJI] sought to launch a 33-million-US-dollar project to alleviate poverty in Cox's Bazar which could benefit the refugees as well as the local population, the initiative said.

But Bangladesh government blocked the UNJI project- which was to be funded mostly by the EU and Australia, accusing the UN of "mala-fide intentions" and claiming that it was an "underhand attempt" to rehabilitate the refugees in the country. 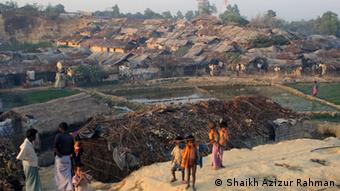 Bangladesh says, any new initiative to help the Rohingyas in Bangladesh would attract fresh influx of refugees and so it cannot allow UNHCR to expand its support to the Rohingyas.

Chris Lewa, the director of Rohingya advocacy group Arakan Project said that extreme miseries force the Rohingyas to flee Myanmar and that they should not be denied refuge by Bangladesh.

"Bangladesh should not turn away people fleeing persecution: non-refoulement is a principle of international customary law, whether a country has signed the refugee convention or not," said Ms Lewa.

Bangladesh says that it firmly stands by its decision not to open its border to the Rohingyas now.

"Right from the time Rohingyas began taking refuge in Bangladesh, we have been a persistent objector to their entry here. When one country persistently objects to such an issue, the international customary law cannot be applicable to it."

Last week in an official statement Myanmar president Thein Sein said, it's "impossible" for Myanmar to accept the Rohingyas because they are illegal immigrants and do not belong to the ethnicity of Myanmar. 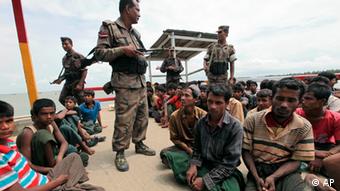 "If Bangladesh does not open its border, the poor people will face very serious trouble," said Nurul Islam, a Rohingya community leader in Bangladesh.

Some rights activists and Rohingya issue experts said that - although the primary responsibility to resolve the Rohingya issue lies with the Myanmar government - by denying shelter to the refugees, Bangladesh is acting against international humanitarian law.

Kelley Currie, a fellow with the Washington-based think tank Project 2049 Institute and a former Asia policy adviser in the US State Department said that Bangladesh is obliged to provide refuge to the Rohingyas.

The first issue is the basic international legal obligation not to return individuals who are fleeing persecution for ethnic, religious or political reasons, said Currie.

"In this case the Rohingyas clearly qualify as refugees if they are able to cross an international border."

Bangladesh claims that it is not a party to the 1951 UN Refugee Convention or its 1967 Protocol, and is therefore not obliged to accept the Rohingyas.

Myanmar's democracy icon Aung San Suu Kyi has been told off by the country's electoral authorities for using the name 'Burma' to refer to the country. So, what really is in a name anyway? (30.06.2012)

Around a billion people around the world suffer from hunger. At this year's G20 summit in Mexico, food security will be one of the topics of discussion - but experts fear that other issues may steal the spotlight. (16.06.2012)