Renowned photographer Shahidul Alam was detained this month after criticizing Bangladeshi authorities in a TV interview. Friends and relatives who recently visited him say that the 63-year-old's health is deteriorating. 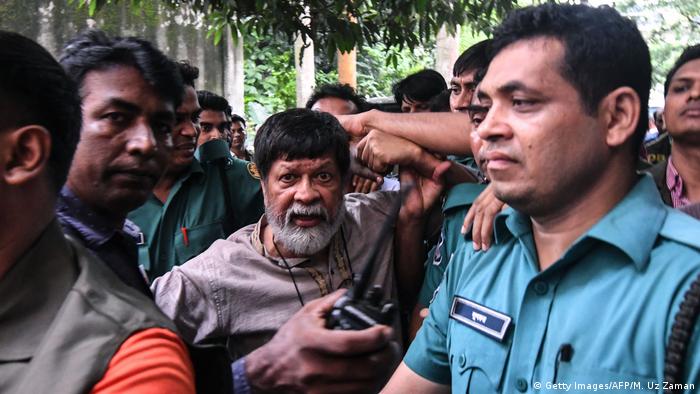 After commenting on and questioning the Bangladeshi government's handling of student protests in an interview with Al Jazeera, photographer and social activist Shahidul Alam was pulled from his home by plain-clothes officers on August 5 and detained. Students have been protesting poor road safety after a bus drove into a group of students, killing two and injuring 10. Police responded to the protests with rubber bullets and tear gas, arresting more than 100 students.

"The government has miscalculated. It thought that fear and repression would be enough, but you cannot tame an entire nation in this manner," he stated in the interview that sparked his arrest.

Rahnuma Ahmed, Alam's wife, issued a statement on August 22 calling for her husband's release due to his need for urgent medical attention.

"We appeal to the government and, more specifically, the jail authorities to ensure immediate medical attention for Dr Shahidul Alam by transfer to a hospital," she wrote.

Shireen Huq, a women's rights activist and longtime friend of Alam, recently visited him in prison and told DW that his health is indeed suffering due to his detention. The 63-year-old has been having difficulties breathing and is in pain. He stated in court that he was beaten by security forces.

"His spirits are high but he did not look too well," she told DW.

Although he has yet to be formally charged, according to his supporters and police authorities he is being held under Section 57 of the ICT Act, which states that any person who publishes material "in electronic form" that "prejudices the image of the State" can be arrested and charged (the Al Jazeera interview is available online). Authorities are also citing comments Alam made on Facebook and are accusing him of incitement.

"The unofficial message to everyone is: 'Don't you dare criticize the government because that will be interpreted as 'anti-state,'" said Huq.

Many critics think that the goal of this law is to protect the administration of Prime Minister Sheikh Hasina and to stifle free speech prior to parliamentary elections slated for this year (no date has yet been set).

Since his arrest, Alam has been receiving significant support within Bangladesh and internationally. Both the The New York Times and the The Washington Post published commentaries in recent days supporting him and pushing for his release. Eleven Nobel laureates have joined other prominent persons in calling for an end to what they see as "unlawful" detention.

"We the undersigned raise our joint voice against arbitrary police remand under the draconian ICT Act against Dr Shahidul Alam," said one statement.

Deutsche Welle's Director General Peter Limbourg has also called for his release. Alam has a long working relationship with DW, having served for five years as the Bengali-language judge for DW's online activism awards known as The Bobs.

Police have detained Shahidul Alam, a Bangladeshi photographer and social activist, for spreading anti-government propaganda. The arrest comes amid large student protests that have convulsed the country for over a week. (06.08.2018)