Nabeel Rajab was on trial for posting tweets that were critical of the Bahraini government. He had denounced the alleged use of torture in Bahraini prisons and abuses in Saudi Arabia's war in Yemen. 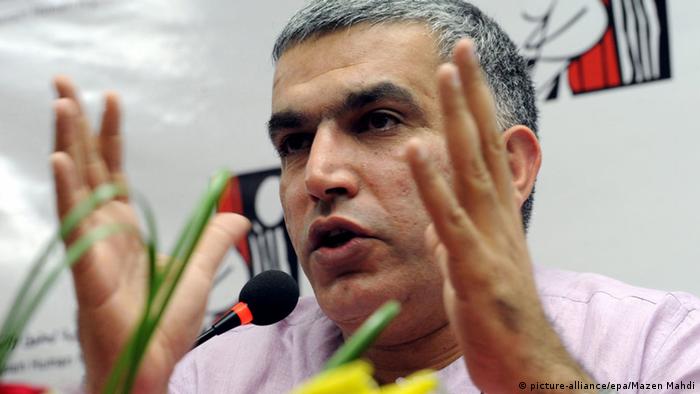 High-profile Bahraini activist Nabeel Rajab was sentenced on Wednesday to five years in prison for posting critical comments about the government on Twitter, his lawyer and the Bahrain Center for Human Rights confirmed.

Rajab was charged with "insulting a neighboring country" and "insulting national institutions" in tweets alleging prison torture in Bahrain and misconduct in Saudi Arabia's war in Yemen.

The 53-year-old was already in prison for prior convictions and held in solitary confinement. Human rights groups had warned about Rajab's deteriorating health. The activist had been hospitalized multiple times in recent years over a heart problem and ulcers.

Rajab's Twitter account posted that the activist arrived in court with a "cheerful smile" and raised his hands, making a peace sign after his sentence was read.

In and out of jail

Rajab was a leading figure in the 2011 pro-democracy protests against the ruling Sunni monarchy, when the country was swept by the regional Arab Spring protest movement. Sunnis are in a minority in the small island nation.

In 2012, he was sentenced to three years in prison for allegedly fomenting clashes between police and protesters in the 2011 demonstrations.

Authorities released Rajab two years into his sentence, in May 2014, but the activist was again detained in June 2016 over the critical comments about torture in prisons and the Saudi-backed Yemeni war. The trial, which today ended with his 5-year prison sentence, was widely condemned internationally.

Additionally, in July 2017, Bahraini authorities put him on trial for allegedly spreading false information during interviews he gave to regional television channels, in which Rajab discussed the country's internal situation in 2015 and 2016.

Representatives from the US, British, French, and German embassies in Bahrain attended Rajab's court hearing on Wednesday.

US State Department spokeswoman Heather Nauert had said on Tuesday, in anticipation of the sentencing, that Washington had "very serious concerns" about the case against Rajab, whom she called "a prominent human rights activist."

Before his involvement in the 2011 pro-democracy demonstrations, Rajab was known for founding the Bahrain Human Rights Society and Migrant Workers Protection Group to promote better treatment of migrant laborers in Arab states.