′Baghdad funnelling pro-Assad militias to Syria′ | World | Breaking news and perspectives from around the globe | DW | 03.03.2012

As the rebellion in Syrian threatens to spiral into an allout civil war, an Iraqi Sunni MP talked to DW about Baghdad's alleged role in neighboring Syria as well as Iraq's political crisis. 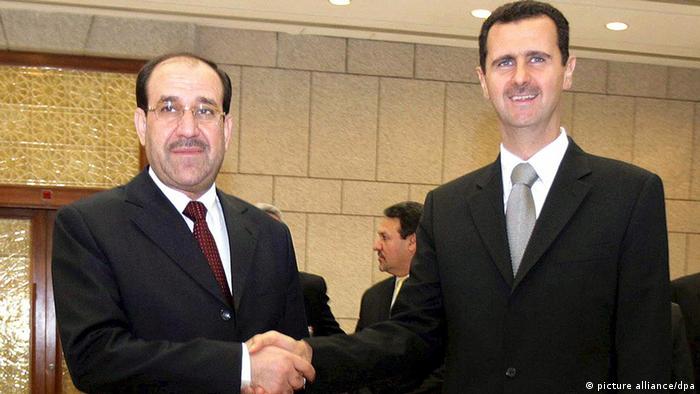 Ahmed Al-Alwani is a member of the secular, Sunni-dominated Iraqiya opposition party.

DW: How would you depict the current political crisis in Iraq?

Ahmed Al-Alwani:The crisis is huge now after Tariq al-Hashemi's (Iraq's vice-president - the ed.) arrest warrant issued by Prime Minister Nouri al-Maliki last December. It has come at the worst moment, amid increasing unrest in the Middle East region and it has dramatically affected the Iraqi Parliament. Besides, the blatant manipulation fostered by al-Maliki's executive is viciously distorting Iraqi politics as a whole. The newly introduced tensions between Shias and Sunnis is growing by the day and, very likely, that's the final goal of the recent political moves.

Sunnis in Iraq are constantly denouncing that they're being discriminated by the Shia coalitions in power. What's behind those statements?

When the US invaded Iraq in 2003 they fuelled this idea of us, Sunnis, being significantly smaller in numbers than the Shias, something which was also bolstered by Tehran. Official statistics after 2003 reduce us to a mere 20 percent of the total population but we have our own statistics that claim that we form around 40 percent of Iraq's people, without including the Kurds - over 90 percent of the latter are also Sunni. Discrimination is more than evident in almost every aspect of Iraqi life. The number of Sunni officials in the security forces or in the Iraqi administration as a whole is not only ridiculous, but also diminishing by the day. The reason is simple: at the very beginning, Sunni clerics would prevent our people from collaborating with the interim government so the Shias got hold of almost every seat, and it has remained like that up to this day.

Where is the marginalization you mention most visible?

I'd say that Sunnis are being rejected almost everywhere except in jail. Ninety-five percent of today's Iraqi prisoners in Baghdad are Sunni, and many of those are not guilty. Besides, Shia and Sunni prisoners are treated in a very different ways. Arbitrary arrests are a common currency to break Baghdad´s demographic spectrum, hence, Iraq is today overrun by Suni internal displaced persons, many of which come to Anbar province.

Many point to Iran as a key player behind the current status quo.

After 2003 Iran took a great effort to break the country into pieces by funding and backing all sorts of militias, including al Qaeda. Iran didn't want a sovereign Iraq ruling its own future so they set our country ablaze through those militias and used the local Shia parties afterwards to regain control. There's no doubt that Iran and those Shias parties are the main responsible for Iraq's current situation.

You mention a link between al Qaeda and Iran but it was actually this very region, Anbar, where the jihadists had their main stronghold.

Americans would always point to al Qaeda after any attack in this region but many of those who were responsible for the attacks were actually Shia militias. In 2006, after we had established the Al Sahwa militia made up of former Sunni insurgents who sided with the American forces to fight al Qaeda, al Qaeda was not fighting the Americans but simply killing our people: scientists, teachers, lawyers. Al Qaeda turned into a mass destruction weapon that levelled our area to the ground and kept us away from power, and that's exactly what helped Iran get inside so fast. Meanwhile, those American fighters deployed in the region did absolutely nothing when al Qaeda was killing our people in Anbar and it was finally us, the local Sunnis from this region, who fought and destroyed al Qaeda, and not the US troops.

The alleged discrimination against Sunnis in Iraq has led to an increasing demand for Anbar province to become a federal region for your people. Would you support such a project?

Iraq's Constitution recognises the federal nature of our country, therefore, it´s completely legal and democratic demand within the Iraqi law. Actually, I was the first one to support that idea year and a half ago, yet I´d like to make that we´re not demanding a separate region on a religious or ethnical basis. As said, we just have the constitutional right to enjoy our own autonomous region like that of the Kurds in the north of the country.

There's also talk of Iraqi Sunni armed groups joining the rebel ranks in Syria but there are also rumors pointing to Iraqi Shia fighters fighting alongside Assad's forces. What do you know about this?

Syria is Iran's biggest ally in the region so they'll fight by any means necessary to keep Assad in power. We have received very reliable information about Shia militiamen, mainly from the Mehdi army - Shia cleric and political leader Moqtada al Sadr's men - being smuggled into Syria to help quell the rebellion there.

So what is Baghdad doing about it?

Three months ago the Iraqi police in Anbar arrested several Mehdi fighters carrying weapons and money bound for Syria. We have strong evidences that these Mehdi militias are crossing every checkpoint within Iraq with a safe-conduct issued by Baghdad so they're not bothered on their way to Syria. Baghdad is actually funnelling these people into Syria. Besides, weapons are brought from Iran into Iraq through Najaf airport in southern Iraq. It comes as no surprise to me as Syria's fall would be a massive catastrophe for Iran.

Coinciding with the first anniversary of 'Iraq's day of wrath,' in the wake of the so-called Arab Spring, Deutsche Welle returns to the scene of a revolution that never was. (29.02.2012)

'The political crisis is massive'

In the wake of the US withdrawal from Iraq and amid a growing internal political crisis, DW spoke to Kifah Al Jawahiri, one of the country's most respected human rights activists. (22.02.2012)