Back to the 1920s with Babylon Berlin's Moka Efti Orchestra 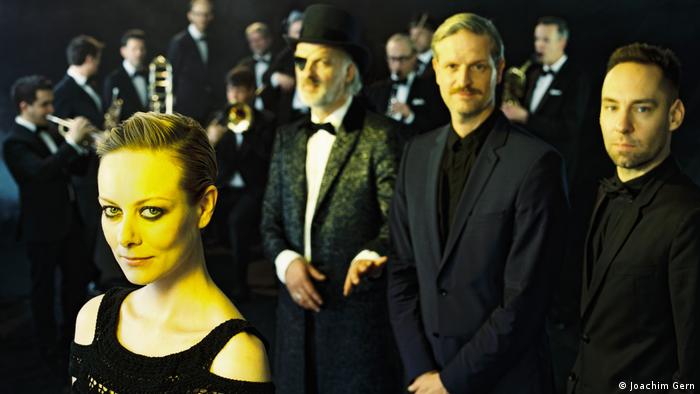 The music is one of the reasons for the success of the Babylon Berlin TV series. Without the soundtrack, it would not have been possible to capture the vibrant mood of an entire era on screen.

The band's repertoire mainly includes songs from the series' soundtrack. In order to capture the musical spirit of the Roaring Twenties, it was important to directors Tom Tykwer, Henk Handloegten and Achim von Borries to cover a wide range of tunes, from swing, blues and jazz to ragtime, Charleston and chansons. The Moka Efti Orchestra also integrates in their works klezmer, a Jewish folk music tradition.

The album Erstausgabe should work well on its own, detached from the series, says saxophonist and arranger Sebastian Borkowski, adding that the band aims to establish "a pop act of their own." The band has two more composers, Mario Kamien and Nikko Weidemann. The latter has been onscreen music supervisor to the series since 2016.

The ensemble of 14 musicians was founded in 2018 especially for Babylon Berlin. The band performed its first concert in May 2018. A year later, they were on tour, not because the series needed the promotion, but because people wanted to hear the music live, says Borkowski. They were booked in clubs, concert halls, operas, philharmonic orchestras and on various festival stages.

In the series, the band performs at the famed Berlin café and dance hall of the same name, which was destroyed during the war. The name combines "moka," which is Greek for coffee, and Efti, the first two syllables of the last name of the man who ran the café, Giannis Eftimiades. The film's café scenes were shot at the Delphi in Berlin-Weissensee, a former silent movie theater.

Severija Janusauskaite plays Svetlana Sorokina, a shadowy character who poses as the daughter of the legendary Sorokin oligarch and is after the family's gold in Babylon Berlin. The Lithuanian actress, director and composer also sings in the Moka Efti, where she calls herself Nikoros.

She sings the series' melancholic title song "Zu Asche, zu Staub" (To ashes, to dust), written by director Tom Tykwer, Kamien and Weidemann. The song made it to number 22 in the German single charts. Severija sings in German, her raspy deep voice and Eastern European accent making "Zu Asche, zu Staub" a highly catchy tune that is hard to resist.

It's the first and darkest book in the crime novel series featuring inspector Gereon Rath. Kutscher paints an atmospheric picture of Berlin in the 1920s, a place filled with illegal dance clubs, cocaine and dead bodies. (08.10.2018)