Azerbaijan's President Ilham Aliyev has appointed his socialite wife Mehriban as the country's 'First Vice President.' The opposition denounced the move as a 'first step to the establishment of an absolute monarchy.' 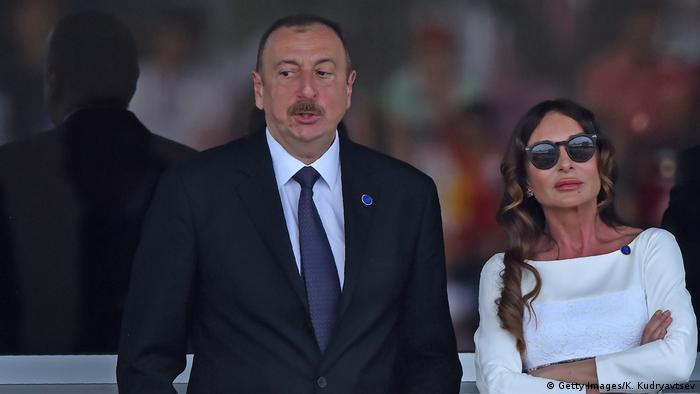 Azerbaijan's president, Ilham Aliyev, on Tuesday appointed his wife Mehriban, a prominent socialite, to the second highest position in the oil-rich Caspian nation. The appointment places her next in line to the president in the country's hierarchy and has sparked condemnation from the opposition.

"Mehriban Aliyeva is a very professional, clever, experienced, principled and benevolent person," Aliyev told Azerbaijan's Security Council. "It is not mere chance that the Azeri people love her very much."

Little more than a month before the European Games commence in Baku, a leading human-rights group is calling for a boycott of host country Azerbaijan. The group says the political situation there is dire. (06.05.2015)

The recently agreed ceasefire can't hide the fact that the raging conflict between Azerbaijan and Karabakh-Armenian separatists could herald a proxy war, according to Christian F. Trippe. (06.04.2016)

Mehriban's official title will be First Vice President. The post was introduced last year last September following a public referendum on constitutional reform. The new constitution, however, does not stipulate the duties the role entails, although it is expected to include overseeing the President's cabinet.

The First Vice President also assumes the presidency if the president is unable to perform his or her duties.

Ilham Aliyev took over the presidency in 2003 from his father, who ruled Azerbaijan first as boss of the Communist Party and then as post-Soviet leader. Aliyev cruised to a third-year term in 2013, albeit against limited opposition; a victory that took his family's rule over Azerbaijan into a third decade.

However, the president's supporters maintain that his rule has brought prosperity and stability to the country in the southern Caucasus, an area that has seen several conflicts since the collapse of the Soviet Union in 1991.

Last year, low oil prices pushed up prices for basic goods, subsequently sparking a number of riots in some cities outside of the capital, Baku. Since then, oil prices have recovered and the situation has stabilized.

A move back into 'medieval, feudal times'

Opposition lawmakers have denounced the appointment of Mehriban as First Vice President, describing it as an abuse of power by the ruling family.

"This appointment shows disrespect to the people," Ali Kerimli, the leader of Azerbaijan's opposition Popular Front Party, said. "It's the first step to the establishment of an absolute monarchy in the country."

The leader of the opposition Equality Party, Isa Gambar, said that the move "throws Azerbaijan back to medieval, feudal times. Family rule has no place in the 21st century." 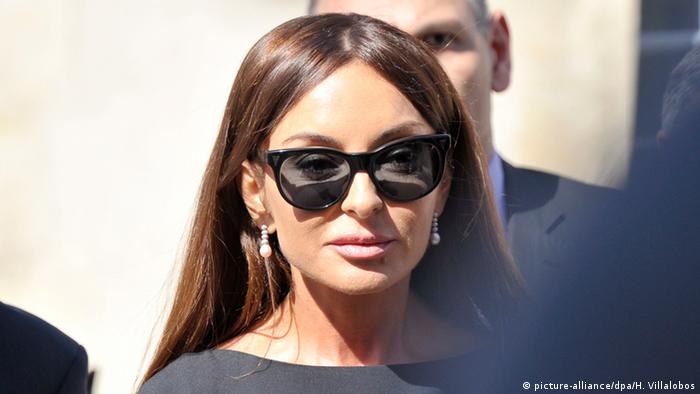 'A first lady, too, in fashion'

An eye doctor by training, Mehriban hails from one of Azerbaijan's wealthiest and most influential families, the Pashayevs.

While her political experience is limited, she has formerly been a member of parliament and a UNESCO goodwill ambassador. Her most prominent role to date, however, has been as head of the Heydar Aliyev Foundation, a philanthropic organization named after Ilham Aliyev's father.

Mehriban is probably best known for her lavish tastes and stylish dress sense.

She featured heavily in the 2010 Wikileaks diplomatic cables leak, in which she was dubbed "a first lady, too, in fashion."

"First Lady Mehriban Aliyeva appears to have had substantial cosmetic surgery, presumably overseas, and wears dresses that would be considered provocative even in the Western world," the leaked cables reported.

Trump, Biden clash on coronavirus, race and healthcare 18m ago

US says Russian hacking group targeted US servers 5h ago