Sebastian Kurz, who is set to become Austria's next chancellor, has already drawn criticism for considering a partnership with the far-right party. Kurz's Conservatives and the FPÖ share similar views on migration. 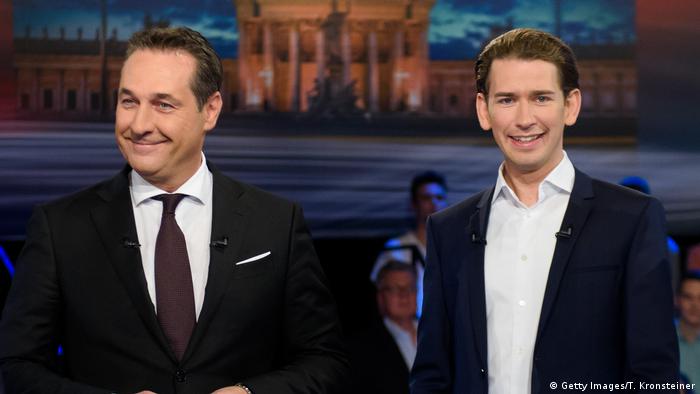 Sebastian Kurz defended his decision to invite the leader of Austria's Freedom Party (FPÖ), Heinz-Christian Strache, to coalition talks. The far-right politician had shown "a will to bring about change in Austria together," Kurz told reporters in Vienna on Tuesday.

Strache later confirmed that the two sides would meet on Wednesday, noting however that a coalition was not a foregone conclusion.

"No one should think we're going to take it easy on the ÖVP," Strache said.

The controversial FPÖ was founded by ex-Nazis in the 1950s and positioned itself as a pan Germanic, nationalist and anti-immigration party. It has since grown to become the third strongest party in Austria, behind Kurz's ÖVP and the Austrian Social Democrats, the SPÖ.

Many European leaders reacted with outrage when the FPÖ last entered into a coalition with ÖVP in 2000. The populist party stayed in power until 2005. In recent years, FPÖ leaders have worked hard to smooth out its extremist image, denouncing anti-Semitism and heavily moderating their anti-EU stance. The party even reached out to numerous eastern European and Balkan migrants in Austria to obtain their votes against unchecked immigration from Africa and the Middle East.

In the run-up to the 2017 parliamentary election, both the FPÖ and the conservatives led by Sebastian Kurz pledged to boost immigration controls, speed up deportations of rejected asylum-seekers and crack down on radical Islam. The FPÖ subsequently claimed 26 percent of the vote, placing it just behind SPÖ which won 26.9 percent. However, Sebastian Kurz and his ÖVP party placed well above both of their rivals, with 31.6 percent of the vote.

For over a decade, Austria has been ruled by a series of grand coalitions between SPÖ and ÖVP, and another such coalition appears unlikely due to ever growing friction between the two parties.

Addressing reporters in Vienna on Tuesday, Kurz said that any future government would need to have "a clear pro-European orientation."

A minority government was also a "good plan B" if the talks with the FPÖ failed, according to Kurz. He added that he planned to form a new government by Christmas.

"Austria deserves to have a stable government formed quickly," he said.

Niger: 2 killed in protests against election results 59m ago

Coronavirus digest: No intercontinental Qantas flights until October 5h ago