The Austrian president will be the first Western head of state to visit the Islamic republic since 2004. His visit comes two months after an international deal signed over Tehran's nuclear program. 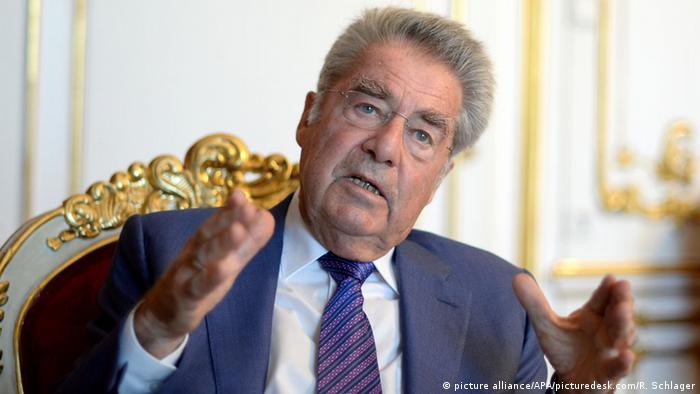 Fischer said he hoped to build bridges and raise human rights issues as he set off for the Iranian capital Monday for a three-day visit.

"Austria is a land of dialogue. We reject violence. We want to build bridges and want to seize every opportunity to reduce tensions and promote a climate that promises a better future than if we remain stuck in confrontation," Fischer said.

Austria's presidency is largely ceremonial and has little political influence.

But the visit is significant as it's the first visit to Iran by a European Union head of state since Thomas Klestil, a former Austrian president, travelled there in January 2004.

Several senior European figures have already visited Iran this summer, including the EU's foreign affairs chief Federica Mogherini, as well as the foreign ministers of France and Britain, which reopened its embassy in Tehran last month.

Stop the Bomb, an organization that accuses the Iranian government of trying to obtain nuclear weapons, says Iran continues to threaten Israel's security, despite this summer's international non proliferation agreement.

"The supreme leader Ali Khamenei, whose hand Fischer will shake tomorrow, openly threatens to this day the Jewish state with destruction and denies the Holocaust," Stop the Bomb spokesman Stephan Grigat said.

The European Jewish Congress, has also criticized the visit, saying Austria's political leadership and business elite should not meet with Iranian officials.

Austrian business leaders seek a five-fold increase in exports to the Islamic Republic, according to the Chamber of Commerce.

Austria, which is avowedly neutral and did not break ties with Iran following the 1979 Islamic Revolution, has long enjoyed relatively warm relations with Tehran.

German Foreign Minister Steinmeier to travel to Iran in October

German Foreign Minister will visit Iran in October, as relations between Tehran and the West continue to thaw following the nuclear deal. Steinmeier said the deal means not less, but more security for the Middle East. (24.08.2015)