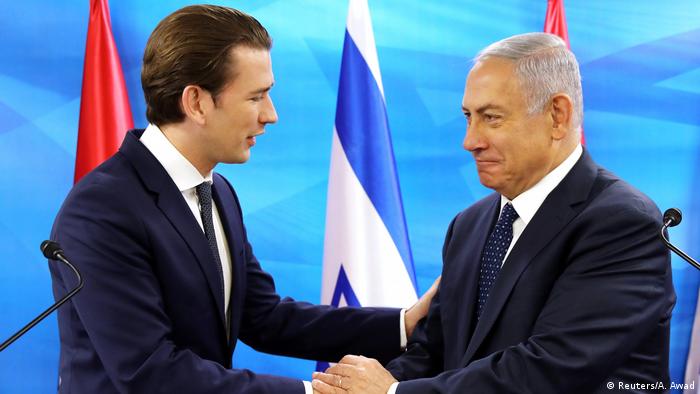 Austrian ministers made pointed reference to their country's past and commitment to the future as Chancellor Sebastian Kurz made a three-day visit to Israel.

"I can assure you that Austria will fight all forms of anti-Semitism in Europe with determination, be it the still existing one or also new imported anti-Semitism," Kurz said during press statements in Jerusalem.  "We will try to raise awareness in Europe for the special situation and the special security needs of Israel."

Signing bilateral agreements on education, science and research, Kurz and Israeli Prime Minister Benjamin Netanyahu were also expected to discuss more delicate topics. They include Israel's non-engagement policy towards the far-right Austrian Freedom Party (FPÖ) party ministers who are the junior partners in Kurz's government coalition. The FPÖ has been accused of failing to tackle anti-Semitism in Austria.

The FPÖ was founded by former Nazis in the 1950s and came third in last year's parliamentary elections with 26 percent of the vote. Israel has said it would not work directly with any ministers from the FPÖ, conversing with civil service contacts in the relevant ministries instead.

The FPÖ controls the foreign, interior and defense ministries, although foreign minister Karin Kneissl is not officially a member of the party, which nominated the former diplomat, academic and journalist for the post.

Education Minister Heinz Fassmann accompanied Kurz to Israel, but Kneissl did not.

In exchange for possible Israeli tolerance towards the FPÖ, there has been speculation Kurz might agree to follow the US, Guatemala and Paraguay in recognizing Jerusalem as Israel's capital.

Austria was one of four EU countries which attended the event celebrating the US embassy move to Jerusalem in May. The others were the Czech Republic, Romania, and Hungary

Prime Minister Benjamin Netanyahu did not mention the FPÖ boycott as he described Kurz as "courageous" and "a true friend of Israel and the Jewish people."

"We welcome the Austrian presidency of the EU beginning on July 1," Netanyahu said as he praised Kurz's comments that "Europe should take Israel's security concerns into account. I think this is very important."

A visit to the Western Wall in occupied Jerusalem

Kurz visited the Western Wall in occupied East Jerusalem and also the World Holocaust Remembrance Center with Holocaust survivor victor Klein and the President of the Jewish Community of Vienna, Oskar Deutsch.

Kurz's tour on Sunday was described as a private visit but it is the first in decades to have been paid by the leader of an EU country to the holy site.

The EU considers the Western Wall to be Israeli-occupied territory.

Austria to expel clerics in crackdown on political Islam

Austrian Chancellor Sebastian Kurz has said his country will force several foreign-funded imams to leave the country in a crackdown on political Islam. Several mosques are also in line to be closed. (08.06.2018)