Austria to give citizenship to descendants of Nazi victims

Austrian lawmakers have voted to provide path to Austrian citizenship for descendants of people who were forced out of the country by the Nazis. Great-grandchildren of Nazi victims would also be eligible. 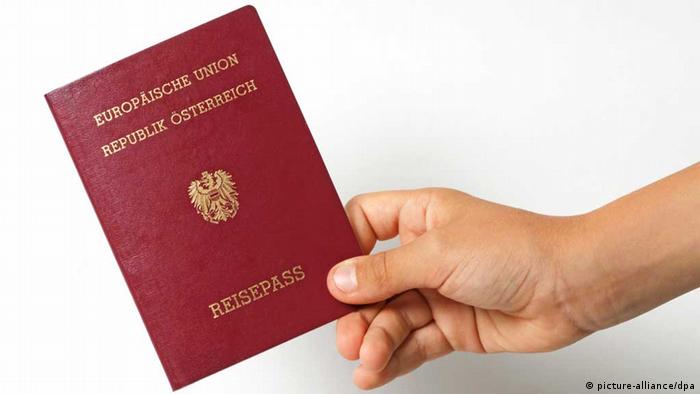 Under a new law, Austria will grant citizenship to claimants who can prove that one of their ancestors was forced out of the country by the Nazi regime. A broad majority voted for the law on Friday in parliament, with the local Jewish community also expressing their approval.

"With this decision, the Republic of Austria is living up to its historic responsibility," said Oskar Deutsch, president of the Jewish Community in Vienna organization (Israelitische Kultusgemeinde Wien).

Under previous regulations, authorities were able to grant Austrian passports to people who were forced out of the country by the Nazi government up to 1945. The new legislation, which was drafted with input from Jewish representatives in Vienna, moves the deadline to 1955, 10 years after the end of the war, and expands it to children, grandchildren, and great-grandchildren of affected refugees. Adopted children are also eligible for an Austrian passport under the new law, according to daily newspaper Kurier.

No passport for terrorists

Additionally, the law would also apply to descendants of people who did not have Austrian citizenship at the time of persecution. However, they would need to have lived in Austria and been nationals of one of the countries that had been part of the Austro-Hungarian Empire, according to the AFP news agency.

In most cases, Austria does not recognize dual nationality. However, people who apply under the law would be allowed to keep their old passport in addition to their new one.

Lawmakers said that the law would not apply to people who were guilty of serious crimes, large-scale financial offenses, and terrorist activities, or to individuals hostile to Austria's democracy.

The law, pushed by the left-leaning SPÖ and supported by Sebastian Kurz's right-wing ÖVP, is set to go into effect in September 2020.