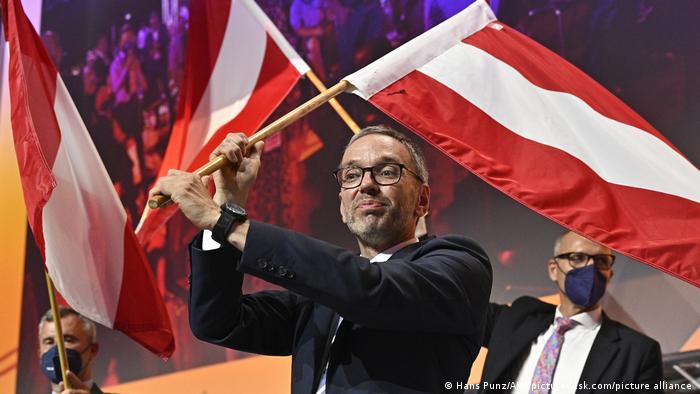 The result was well below party leader Heinz-Christian Strache's 98.7% support in 2017 and Kickl's predecessor, Norbert Hofer, who received 98.3% in 2019.

Kickl's election marks a shift from the approach used by Hofer, who attempted to portray a more moderate image to appeal to swing voters.

After the results were announced, Kickl addressed the session and assured party members that "we are playing for victory."

"Simple people are simple, but they're not stupid," he said, urging members not to underestimate what could work well with regular voters.

Kickl's routine statements against migrants and Islam resonate with the party’s core voter base but won’t necessarily broaden the FPÖ's appeal.

His first major test of leadership will come in the form of regional elections in the state of Upper Austria in September.

He may also face challenges within the party, after several members quit as his nomination drew near.

Long seen as a prominent figure in shaping the FPÖ's ideology, Kickl has been an opponent of measures taken by the Austrian government to curb the spread of the coronavirus.

He has been openly critical of the Austrian chancellor and head of the ruling Austrian People's Party (ÖVP), Sebastian Kurz, and used his inaugural speech to take another dig at the party’s former coalition partner.

The FPÖ and Kurz's ÖVP were in a coalition between 2017 and 2019, which fell apart after Strache was seen offering business contacts for political support on tape.

With growing animosity between Kickl and Kurz, the FPÖ's return to a federal coalition government seems unlikely.