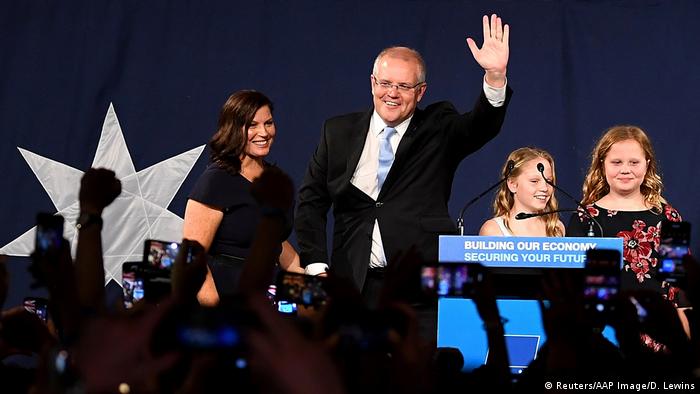 "Without wanting to hold out any false hope, while there are still millions of votes to count and important seats yet to be finalized, it is obvious that Labor will not be able to form the next government," Shorten said, conceding the election to incumbent Prime Minister Scott Morrison.

The results were something of an upset, as polls ahead of the elections had given Labor a slight lead.

"I have always believed in miracles ... and tonight we have been delivered another one!" declared an exuberant Morrison. "How good is Australia! And how good are Australians!"

Morrison went on to say the win was for the "quiet Australians," and that "it's always been about them."

Another confirmed result saw former Prime Minister Tony Abbott lose his Sydney seat of Warringah, which he had held for 25 years.

Though Morrison touted his party's economic credentials ahead of the election, analysts had predicted a lingering voter backlash following a messy internal power struggle last year that saw him oust his socially moderate predecessor.

Morrison was seen as a compromise between the Liberals' heavily conservative faction and the moderates. However, he has failed to unite the two sides.

Shorten, the reserved Labor leader, had seemed to strike a chord with voters, who feel left behind financially and are worried about the environment.

As he cast his ballot earlier on Saturday, Shorten was confident about forming a majority government.

"Today is the people's day," he said. "Be it buying a 'democracy sausage' (from the traditional barbecues held at polling locations), the kids having a bit of a sugar cake or what have you, and voting."

"In the event that the people of Australia voted to stop the chaos and voted for action on climate change, we will be ready to hit the ground from tomorrow," he said.

Morrison, meanwhile, warned voters against voting Labor: "It's not the time to engage in Bill Shorten's big, risky project of big taxes and big spending."

Climate change emerged as a major factor in the election, with the Liberal Party clinging to the coal industry, despite turning public opinion and a season of record floods, wildfires and droughts.

As well as picking new lawmakers for the 150-seat House of Representatives, Australians were also choosing 76-members of the Senate.

Ahead of the vote, polls showed Labor winning 49% to 51%, but with a complex preferential electoral system, an upset is always possible. Two weeks ago, Labor was polling 48% to 52%.

There are about 17 million eligible voters in Australia, and voting is compulsory.

Australia's economy has expanded continuously for over a quarter of a century without undergoing a recession. Despite the impressive achievement, the country faces a slew of challenges that might end its growth streak. (30.06.2017)

Australia will hold new elections in May

Prime Minister Scott Morrison moved to dissolve parliament and call for new elections. The conservative leader will face a challenge from center-left Labor leader Bill Shorten, who currently leads in the polls. (11.04.2019)

Thousands of Australian children have walked out of school calling for government action on climate change. Australia is one of the biggest per capita carbon polluters in the world. (30.11.2018)