The world number two has been thrashed 6-0, 6-2 by Australian Open debutante Danielle Collins. The American sets up a quarter-final clash with Russian Anastasia Pavlyuchenkova. 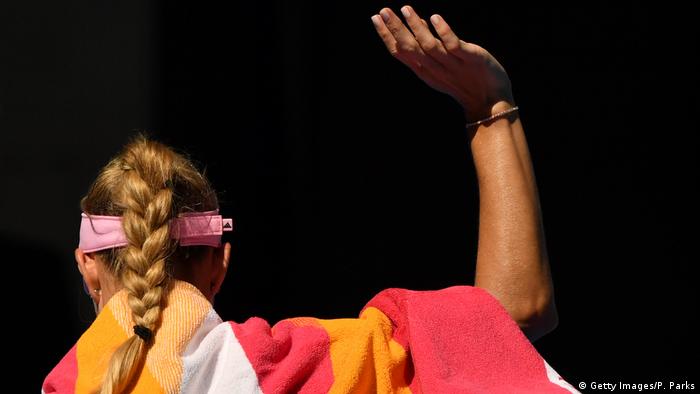 Despite winning the Australian Open three years ago, German Angelique Kerber was knocked out of the year's first Grand Slam tournament on Sunday by unseeded American Danielle Collins.

The 25-year-old Collins, ranked 35th in the world, took less than an hour to demolish second-seeded Kerber 6-0, 6-2, to advance to the quarterfinals.

Collins breezed through the opening set in 20 minutes with three service breaks, hitting winners on all sides of the court against the second seed, who had five double faults in the set.

After an early trade of breaks in the second set, Collins smashed a backhand to break Kerber's serve and take a 4-2 lead, before breaking the German once again to seal victory on her first match point in 56 minutes.

Wimbledon champion Kerber, who turned 31 on Friday, entered the match as the overwhelming favorite after not dropping a set in her opening three matches.

Collins, making her first appearance in the main draw at Melbourne Park, will next play Russian Anastasia Pavlyuchenkova.

"I may not have won a Grand Slam match before this but I tell you, it's going to keep happening," said 25-year-old Collins after her win. "I better have many more of these."

Earlier in the day, Australian Ashleigh Barty also became a surprise quarter-finalist after bringing Maria Sharapova's attempt to win a first Grand Slam since the 2014 French Open to a grinding halt 4-6, 6-1, 6-4.

In the men's draw, defending champion Roger Federer was surprisingly beaten by 20-year-old Greek Stefanos Tsitsipas in four sets. After the Swiss won the first 7-6, Tsitsipas won 7-6, 7-5, 7-6 to claim the shock result and become the first Greek in history to reach the quarterfinals of a slam.

In truth it was a day of upsets as American Frances Tiafoe defeated Grigor Dimitrov, and will face Rafa Nadal after the Spaniard's straight set victory against Tomas Berdych. Last year's semifinalist Marin Cilic was beaten in an epic five set battle by Roberto Bautista Agut, who will now face Tsitsipas.

Temperatures are set to climb next week as heatwave conditions persist in parts of the country. The searing heat has had a particular impact on the Australian Open tennis tournament and a cycling event. (18.01.2019)

Andy Murray bowed out of the Australian Open with a roar, not a whimper. The former world No. 1 battled hard in the loss to Roberto Bautista Agut, which may have been the last match of his professional career. (14.01.2019)

Angelique Kerber celebrated her birthday in style by crushing Kimberly Birrell 6-1 6-0 in the Australian Open third round. With Birrell out, Melbourne needs a new home favorite and Stefanos Tsitsipas fits the bill. (18.01.2019)