Angelique Kerber celebrated her birthday in style by crushing Kimberly Birrell 6-1 6-0 in the Australian Open third round. With Birrell out, Melbourne needs a new home favorite and Stefanos Tsitsipas fits the bill. 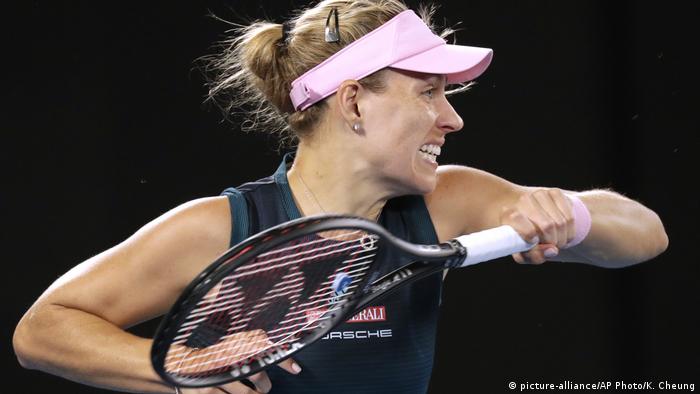 Germany's in-form Angelique Kerber was in a rush to make the Australian Open fourth round, dismantling Kimberly Birrell in just 58 minutes, leaving her time for a little celebration on her 31st birthday.

Any fears that Australian Birrell - born in Germany - would whip up the home crowd into a frenzy were quickly allayed by Kerber's superior ground game. She hit 17 winners to Birrell's 10 but the second seed really profited from her opponent's wayward play.

The Australian wildcard made 30 unforced errors, quite a feat in only 13 games.

Caroline Wozniacki waited years for her first grand slam title last January in Australia. In comparison, she has lost her title in the mere blink of an eye.

The defending champion coming up against a five-time grand slam winner in Maria Sharapova so early in Melbourne may seem unfair, but the Russian was seeded only 30th after recent travails. She dominated the Dane, progressing to round four with a 6-4, 4-6, 6-3 victory which included 37 winners.

Third seed Wozniacki had raced into a 4-1 lead before Sharapova stormed back. Wozniacki, 28, rediscovered her verve in the second set but ultimately succumbed to her opponent's greater power. Sharapova next faces 15th seed Ashleigh Barty of Australia.

The result has implications for Germany's Kerber. if the second seed manages to push on to the semifinals, Sharapova not Wozniacki could now lay in wait.

Among the men, defending champion Roger Federer swatted aside American Taylor Fritz 6-2 7-5 6-2 to set up a fourth-round meeting with Greek 20-year-old Stefanos Tsitsipas.

The huge Greek population in Melbourne has made Tsitsipas somewhat of a star and 37-year-old Federer will have his work cut out against a partisan crowd.

Tsitsipas has even had a souvlaki kebab named after him by a Melbourne Greek restaurant.

Rafael Nadal is also through after a regulation 6-1 6-2 6-4 victory over Australia's Alex de Minau.