Germany's No.1 Angelique Kerber has advanced to the third round of the Australian Open, seeing off Brazil's Beatriz Haddad Maia. Elsewhere, defending champions Caroline Wozniacki and Roger Federer also progressed. 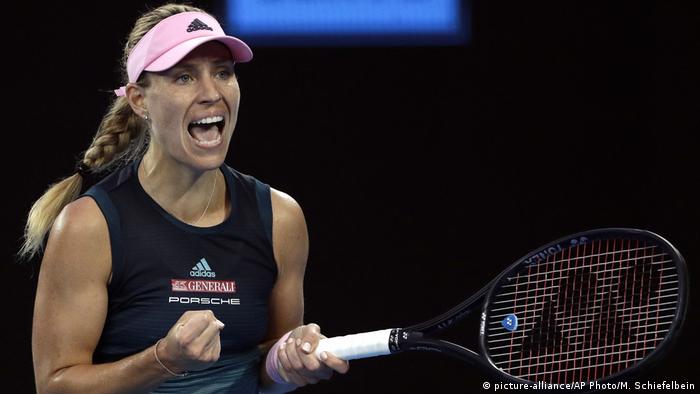 Germany's Angelique Kerber sailed into the third round of the Australian Open on Wednesday with a 6-2, 6-3 victory over Brazil's Beatriz Haddad Maia.

Kerber won this competition back in 2016 and looks to be in great form in the early stages of this tournament, producing a fierce display as she overcame the 22-year-old Haddad Maia in a battle between two left-handed players.

"It was a really tough match," Kerber said after the win. "She played really well. I knew that I had to play my best tennis."

Despite the scoreline, Haddad Maia made the reigning Wimbledon champion work hard for her win, with the first set lasting almost 50 minutes. The second, by comparison, took just half an hour, despite being a game longer.

Haddad Maia hit 13 winners to Kerber's seven in the opening set, but was unable to match the German's consistency. Kerber's six unforced errors to the Brazilian's 29 told the true story, but Maia again made life hard for her opponent in the second set.

Kerber had to wait until the eighth game to go up a break, before serving out the match with ruthless efficiency.

Kerber will now face Australian wildcard Kimberly Birrell in the round of 32. Despite the difference in ranking and experience, the German believes the home support could provide a big lift for the 20-year-old.

"I saw a bit of her last match. She played really well, she's in the third round," said Kerber. "She's playing at home, I'll have to play at my best again."

Federer does the hard work

Earlier, defending champion Roger Federer made it 20 in a row – the six-time Australian Open winner has made it to the third round of the competition every year since 1999. Following the match, he admitted that it beating Britain's Dan Evans hadn't been easy.

"Playing a player like Dan Evans is like facing myself," the 37-year-old said. "It feels like playing a mirror a little bit. That was my mindset heading into it: how would I play myself potentially?"

Evans, ranked 189th in the world, made life hard for the Swiss master, keeping him battling for more than two hours in a what was ultimately a straight-set defeat, 7-6 (7-5), 7-6 (7-3), 6-3. Federer said before the match he expected Evans to cause him more problems than the last time they met, at Wimbledon in 2016, and was proven right in a grueling match.

"It always helps when you sneak a break in the first set," said the 20-time Grand Slam champion. "The match might have been different. I have high regard, you know, for Dan. I think he's a good player."

Evans lost his career-high ranking of 41 in April 2017, after testing positive for cocaine, and served a yearlong ban. He certainly appeared closer to his old ranking as he led the first set tie-break 5-3. Federer's class shone through, however, as he won the next four points to steal a first set victory. That would have been enough to crush the spirit of many lower-ranked opponents, but Evans refused to be cowed as he again put up a thrilling fight in the second set. He needed treatment for blisters before it started, but played through the pain to take the second to a doomed tie-break.

The third was a different story, however, as Federer showed his pedigree when it comes to closing out matches. A 6-3 victory arrived without hiccups as he booked his place in the next round.

Federer will face unseeded American Taylor Fritz in the round of 32.

Wozniacki ready for anything

Defending women's champion Caroline Wozniacki made light work of her second round match against Johanna Larson, defeating the Swede 6-3, 6-1 at the Margaret Court Arena on Wednesday.

"It doesn't matter who I play," she said. "I'll play my best in the next match and if I play my best I'm hard to beat."

Later in the day, second seed Rafael Nadal beat Matthew Ebden in straight sets 6-3, 6-2, 6-2 to move to No. 3 on the list of match wins at the Australian Open in the professional era.

The win improved the 2009 champion's win-loss record to 57-12 at the Australian Open, surpassing Stefan Edberg's mark of 56 wins. Six-time champions Federer (96) and Novak Djokovic (62) hold the top two spots on that list.