Australia's top court has thrown out a suit brought by a refugee against its remote migrant detention centers. Hundreds of refugees now face deportation back to the island of Nauru in the south Pacific. 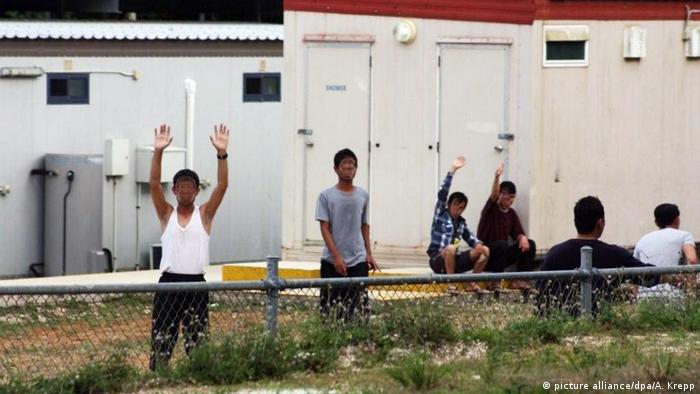 A group of more than 260 asylum seekers may have to return to the tiny Pacific nation of Nauru, after Australia's highest court on Wednesday rejected the challenge they mounted to Canberra's immigration detention policy.

The Australian government does not allow any refugees who arrive by boat to stay or resettle on the mainland, with few exceptions outside of medical emergencies.

This is the situation that gave rise to the suit, led by a Bangladeshi woman who was sent to Nauru in January 2014 to live in one of Australia's offshore refugee camps. After being sent to Australia in August of that year due to pregnancy complications, she gained an injunction to let her stay on the mainland until her case was heard.

She was later joined by 266 other asylum seekers, 91 of them children, who had come to Australia from the Nauru camp for medical reasons or to accompany a sick family member. Migrants have long complained about the conditions in these camps, such as the one on Christmas Island, which has seen a string of protests launched by detainees upset at their treatment and uncertain fate.

The majority of the seven judges on the Australian High Court however voted to throw out the case, arguing that deporting the refugees back to Nauru was in keeping with the country's policy. The 267 migrants now risk being sent back to the remote island with only 72 hours notice.

"The legality is one thing, the morality is another," said Daniel Webb of the Human Rights Law Centre, the Melbourne-based legal advocacy who was working the case against the government for the asylum seekers.

"It is fundamentally wrong to condemn these people to a life in limbo on a tiny island. The stroke of a pen is all that it would take our prime minister or our immigration minister to do the decent thing and let these families stay," he added.

Canberra has come under some international criticism for its offshore detention policy, but so far has refused to budge on the matter.

20 years ago, war forced some 350,000 refugees from Bosnia-Herzegovina to flee to Germany. Today, many more war refugees are arriving, but policies toward them remain the same. (02.02.2016)

They cross deserts and brave oceans to escape war, only to disappear without a trace in Europe - including in Germany, a prime destination for refugees. How can thousands of refugee children simply drop off the radar? (02.02.2016)

Novak Djokovic drawn to play in Australian Open first round 13.01.2022

The tennis No.1 was drawn to face fellow Serb Miomir Kecmanovic in the first round of the tournament — but the Australian government has yet to decide whether to cancel his visa.