Several Australian media outlets have been accused of breaching a gag order related to the sex abuse trial of Cardinal Pell. A lawyer told a first hearing the charges were unprecedented in Australian legal history. 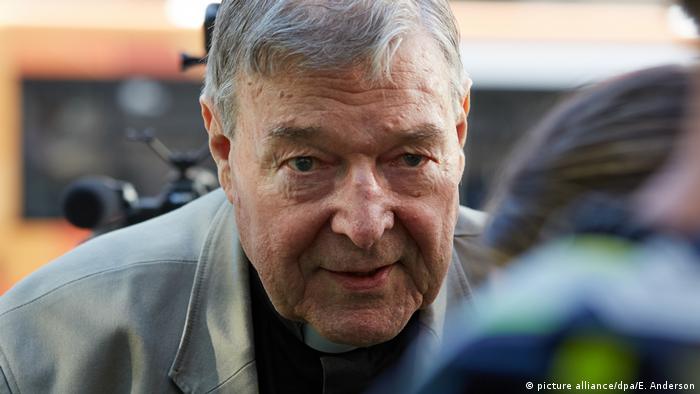 A lawyer defending several Australian media outlets against contempt charges over their coverage of Cardinal George Pell's child sex abuse conviction told a court on Monday that the accusations were without precedent.

"There are simply no cases of which we are aware in Australia where media organizations, editors or journalists have been charged, much less found guilty, of contempt in circumstances such as these," Matthew Collins told a first administrative hearing in the case, in comments carried by local media.

Collins added that a guilty verdict would have a "chilling effect" on open justice and democracy in the country.

Prosecutors in the eastern state of Victoria have accused the 23 journalists and 13 news outlets of breaching a gag order on reporting on Pell's trial last year. The cardinal was found guilty of abusing two choirboys and given a six-year prison sentence. He is appealing his conviction.

The journalists and news organizations face prison or fines for contempt of court, aiding and abetting overseas media, breaching a suppression order and "scandalizing the court" with materials they published.

Collins asked prosecutors to give more information about how Australian media outlets had violated the court order if they had not mentioned Pell's name or his conviction.

"I am at a loss to understand how they could have scandalized the court," he said, adding: "They didn't reference the cardinal, just referred to the fact that there was a broader story that could not be told."

The judge, John Dixon, agreed with Collins' argument and called on prosecutors to provide detailed statements of their claims by May 20, while setting a new hearing for June 26.

The verdict in the Pell trial in December was widely reported by foreign outlets, although a Victorian court was still maintaining a media suppression order in Australia to prevent jury prejudice before a second trial that was later dropped. Australian media, in their reports, did not report on the charges involved or mention Pell by name, but did run articles in which they complained of not being allowed to report on a matter of major public interest.

The gag order was lifted after the cancelation of the second trial.

The case highlights the difficulties of enforcing gag orders in the digital news era. Deutsche Welle was among the foreign news organizations to respect the suppression order.

Pell, 77, a former archbishop who served as the Vatican's economy minister, is the most senior Catholic cleric worldwide to have been convicted of child sex abuse.

Breaking the silence on sexual violence