Ex-Pope Benedict XVI says the sexual revolution of the 1960s is to answer for child sex abuse in the Catholic Church. The former pope wrote in an essay that "absence of God" was behind acts of pedophilia. 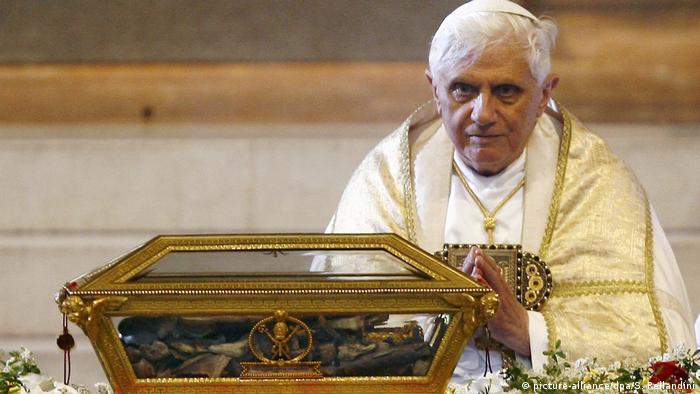 "Among the freedoms that the Revolution of 1968 sought to fight for was this all-out sexual freedom ... Part of the physiognomy of the Revolution of '68 was that pedophilia was then also diagnosed as allowed and appropriate," he wrote in the 6,000-word essay for Klerusblatt, a German monthly magazine for clergy.

"Why did pedophilia reach such proportions? Ultimately, the reason is the absence of God," he wrote, noting failed attempts to include a reference to God in European Union treaties as a negative example of Western secularization

Benedict, born in Germany as Joseph Ratzinger, cited the appearance of sex in films in the '60s in his native Bavaria and the formation of "homosexual cliques" in seminaries "which acted more or less openly and significantly changed the climate." He also attributed it to failures in moral theology in that era.

Abuse scandals in Ireland, Chile, Australia, France, the United States, Poland, Germany and elsewhere have seen the Church pay out billions of dollars in damages to victims and close parishes, with many cases dating back decades before the 1960s.

The Vatican has been embroiled in the scandals. Most recently with the conviction of Cardinal George Pell, who was sentenced to six years in jail for abusing two boys in his native Australia.

Benedict, who in 2013 became the first pope in six centuries to resign, also faulted church laws that protected accused priests.

He wrote that during the 1980s and 1990s "the right to a defense (for priests) was so broad as to make a conviction nearly impossible."

As Cardinal Joseph Ratzinger, Benedict led reforms of those laws in 2001 to make it easier to remove priests who abused children.

He took a hard line against clerical sex abuse as the Vatican's conservative doctrine chief, and later as pope, defrocking hundreds of priests accused of raping and molesting children.

Benedict wrote in the introduction to the essay that Francis and the Vatican secretary of state had given him permission to publish. The Vatican also confirmed it was written by Benedict.

Essay is 'a caricature' of events

Writing in the Catholic Herald, associate professor of theology at The Catholic University of America Chat Pecknold praised the essay as a necessary word from "the voice of a father" that accurately identified an absence of God as the reason for the crisis.

But other church analysts said the essay was both flawed in content and exacerbated existing divisions in the church that have emerged between supporters of Francis and Catholics nostalgic for Benedict's doctrine-minded papacy.

"It is catastrophically irresponsible, because it creates a counter-narrative to how Francis is trying to move ahead based on the 2019 summit," Church historian Christopher Bellitto told The Associated Press in an email. "The essay essentially ignores what we learned there."

Villanova University theologian Massimo Faggioli said the essay was thin in its analysis, which effectively attributed the scandal to the sexual revolution. He said it excluded key cases, such as the Legion of Christ founder's pedophilia, which began long before then and involved abuse in one of the most rigorously orthodox, conservative religious orders.

"Everything we know in the global history of the Catholic abuse crisis makes Benedict XVI's take published yesterday very thin or worse: a caricature of what happened during in the Catholic Church during the post-Vatican II period  with all its ingenuities and some tragic mistakes," he tweeted.

A Vatican tribunal has confirmed the child abuse conviction of former Guam Archbishop Anthony Apuron. He was accused of molesting altar boys in the 1970s, but the Vatican has not released the exact details of his crimes. (04.04.2019)

At the Vatican, Pope Francis has issued wide-ranging new sex abuse legislation that covers all Vatican personnel as well as those who work for the Vatican diplomatic corps. It aims to be a model for the church globally. (29.03.2019)