Auschwitz March to Recall Holocaust Victims | Europe | News and current affairs from around the continent | DW | 04.05.2005

Thousands of people from some 50 countries have begun converging on southern Poland to take part Thursday in a march in memory of Holocaust victims at Auschwitz-Birkenau, the most grimly efficient of Nazi death camps. 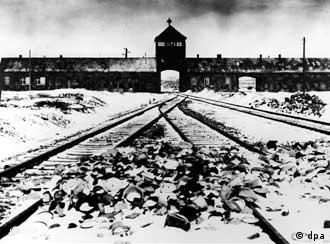 The March of the Living was started to counter Holocaust denial

"This year's 'March of the Living' will be the largest ever, with 18,000 to 20,000 people coming to Auschwitz on May 5, which is Holocaust Remembrance Day," the event's director Aaron Tamir told reporters in Warsaw last week. "It is going to be a huge and complicated event because this year marks the 60th anniversary of the liberation of Auschwitz-Birkenau and death camps in other countries, and the whole world is paying attention," Tamir said.

At least 1.1 million men, women and children, most of them Jews, died at Auschwitz-Birkenau, one of the key extermination sites for Nazi Germany's "final solution," which aimed to wipe out Europe's 11 million Jews. The Nazis succeeded in exterminating six million European Jews, half of them from Poland, home to Europe's largest Jewish community before World War II.

Israeli Prime Minister Ariel Sharon, his Polish counterpart Marek Belka and Prime Minister Ferenc Gyurcsany of Hungary, which lost 450,000 Jews at Auschwitz, will be among dignitaries who will attend the event. Sharon was "unlikely to march," the organizers told AFP.

March of the Living 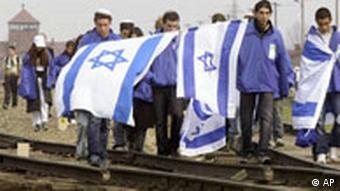 Young Israeli participants at the Nazi Auschwitz-Birkenau death camp during the March of the Living in 2002.

In light of the huge numbers taking part this year, the organizers have arranged for thousands of people to set off Thursday morning for the three-kilometer (two-mile) walk from the train station at Oswiecim -- the Polish town which tragically gave its Germanized name to the Auschwitz camp -- to the Birkenau sector of the death camp. The main march, which will group around 10,000 people, including many international officials, will leave from the original camp at Auschwitz in the early afternoon.

Auschwitz was set up by the Nazis in 1940 on the site of a former Polish army barracks on the outskirts of Oswiecim and expanded later to the village of Brzezinka -- Birkenau in German -- three kilometers away, to allow Hitler's Germany to more efficiently kill Jews, Sinti, Roma, Poles and others considered inferior human beings.

At Birkenau, near the rubble of two interconnecting gas chambers and crematoria the marchers will gather in mid-afternoon for a memorial ceremony, held near the train track that carried Jews and other deportees to almost certain death more than 60 years ago. The camp was liberated on Jan. 27, 1945 by Soviet troops.

Belka, Sharon, professor, writer and former Auschwitz inmate Elie Wiesel will be among those to give speeches to the gathering, which this year will include as many Holocaust survivors and their descendants as possible, according to Tamir.

"The survivors will not be with us forever, and when they are gone, it will be easier for those who deny the Holocaust to spread untruths," Tamir said. "The idea for the march came some 20 years ago when there were voices saying the Holocaust never existed," he said. The denials "were heard by students and young people around the world and the founders of the March of the Living decided the best way to stop the debate was to bring youths from all countries to see with their own eyes what happened." 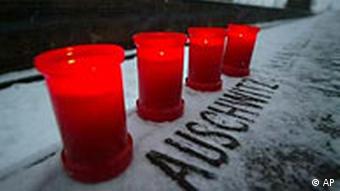 Candles lit to remember the Holocaust victims at the 60th anniversary of the liberation of the Nazi-era Auschwitz death camp at a loading ramp of former German railway company Deutsche Reichsbahn on Jan. 27, 2005.

From its start in 1988, when it gathered small groups of young Jewish people, the March of the Living has grown to include "adults, survivors, students, youngsters, pupils" and, for the past few years, non-Jews.

"Our project is to take people 'from Holocaust to revival,'" Tamir said.

Some participants come to Poland just for the day of the march while others spend a week in the central European country, which lost six million civilians in World War II, half of them Jews, visiting sites linked to the Holocaust.

"Participants see and feel the Holocaust with their own eyes," Tamir said. "Then many young people fly to Israel for the 'revival' part of our project."

The principal aim of the march remains "to make sure that what happened more than 60 years ago never happens again," he added.

As Europe observes the 60th anniversary of the liberation of Nazi concentration camps, Holocaust educators in Germany are wondering how to keep its lessons relevant to future generations. (Jan. 26, 2005)

Commemorative events marking the 60th anniversary of the liberation of Auschwitz continued throughout Thursday as world leaders spoke of an evil that must never be allowed to surface again. (Jan. 27, 2005)