Dealing a Blow to Holocaust Deniers | Germany| News and in-depth reporting from Berlin and beyond | DW | 10.03.2005

Deborah Lipstadt never took the stand during the landmark libel case she won against British Holocaust denier David Irving. Now, five years on, the US historian tells the story of her six-year legal battle in a new book. 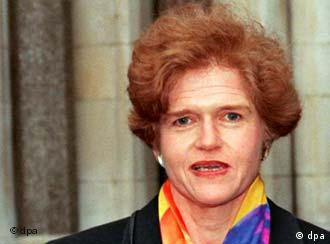 Deborah Lipstadt: "The book is my voice at long last coming out"

In "History on Trial: My Day in Court with David Irving," Emory University professor Deborah Lipstadt recounts her legal battle with David Irving, the widely-read World War II writer, and a man she called "one of the most dangerous spokespersons for Holocaust denial" in her acclaimed 1993 book, "Denying the Holocaust: the Growing Assault on Truth and Memory." Following the book's publication, Irving accused Lipstadt of damaging his reputation as a historian. But by the end of the ensuing libel trial -- in which Irving defended himself -- his reputation was thoroughly skewered. Justice Charles Gray condemned Irving, saying that he had "persistently and deliberately misrepresented and manipulated historical evidence," and called him an "active Holocaust denier…anti-Semitic and racist." While in Berlin to present her latest book, Lipstadt spoke about her court victory in a DW-WORLD interview. 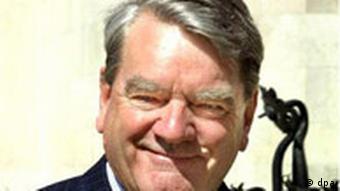 DW-WORLD: Six years of your life, a lot of effort, expense and emotion went into this libel case brought against you by David Irving (photo). Was it worth it?

Deborah Lipstadt: I think it was. First of all, I had no choice. British libel law places the onus on the defendant, so that you're essentially, from an American perspective, guilty until proven innocent. If I hadn't fought, he would've won by default. He could have said that his version of the Holocaust -- which is that there was no central program to kill the Jews, no Hitler involvement, no gas chambers and in which the survivors are all liars and psychopaths -- was telling the truth. If you look back now, any time David Irving is mentioned, his name is followed by some version of the adjectives "Holocaust denier," "racist" or "anti-Semite." He's no longer reviewed in the New York Review of Books, The New York Times, or the Times Literary Supplement, for example, so I think in that sense it was "worth it."

A lot of people might be tempted to label Holocaust deniers as extremists that don't need to be taken seriously. Your trial showed that this isn't the case, as Irving was well-respected in some circles. How prevalent is the threat posed to history by Holocaust deniers now?

It's a little hard to judge because with the Internet, geographical borders become amorphous or porous. I don't think the threat is really prevalent. I think the deniers have been dealt a very serious blow. The main source for Holocaust denial today is in the Arab world, where it is very prevalent, and is almost gross in its lack of sophistication. But I don't think in Europe it's a major issue, because essentially, as a result of the trial, we laid waste to virtually every Holocaust denial argument as they stood through 2001/2002.

In Germany though, there is a debate going on, not about outright denial, perhaps, but about revisionism as we saw recently with the 60th anniversary of the bombing of Dresden. In the run-up to that anniversary, the far-right NPD party tried to cast that event as a "bombing Holocaust" against Germans. Are you at all worried about the situation in Germany?

I am worried, not about denial, but about relativism. I'm worried about things like the Flick collection being brought to Berlin, I'm worried about Dresden. Ironically, it's David Irving who is responsible for the feeling that Dresden was such a crime, because his book was one of the first books on the topic early in the 1960s. In the trial, we found that he tremendously exaggerated the number of victims. There were even Germans who were writing to him back then, trying to correct him and saying that his numbers were way out of whack. He just ignored their comments. Dresden was a tragedy. It's a tragedy anytime people die, particularly civilians in a war, but inflating the horror of it was in order to make what I call immoral equivalencies. It was in order for him to say, "Well yes, maybe 80,000 people died at Auschwitz from war-related privations" -- which is not true, they were murdered and it was more than 80,000 -- "but a quarter of a million people died in one day and one night of bombing in Dresden, now that's a real tragedy."

David Irving defended himself in court, so you heard plenty from him. You did not take the stand -- why was that?

First of all, I wasn't obligated to take the stand. I offered to. I continuously told my lawyers that I was more than willing to take the stand, that I could hold my own against this guy. But the standard operating procedure in libel trials is not to put the author on the stand. The author is being sued for what they wrote. So my book was at issue. We had to prove that what I wrote in my book was correct, and there was nothing I could add by taking the stand. Though I do have to say that for me, someone for whom keeping quiet is an unnatural act, it was terribly difficult to restrain myself and listen to a man who was spewing anti-Semitism and racism.

That's where your latest book comes in. 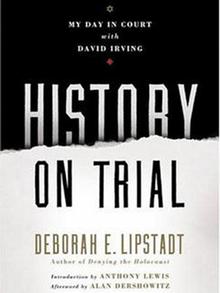 The book is my voice at long last coming out, and it really follows three strands. It follows our legal strategy, the historical issues -- how does this man twist the truth, how does he play with the documents, and so on -- and the third strand is the personal. There was a very heavy personal element, first of all in terms of the disruption to my life, but that's the least of it. The most striking personal element was the encounter with survivors and children of survivors and veterans. People would stop me as I walked into the courtroom in the morning and put pieces of paper in my hand with lists of victims' names, and they would say, this is my evidence. There was a day when Irving was trying to argue that the Allies were responsible for the people who were found in the concentration camps in Germany who looked like cadavers at the end of the war, because the Allies had bombed the pharmaceuticals factories and the infrastructure so the Germans couldn't get food and medicine to the camps. At the end of that day, an older man walked up to me. He had a cane, but he still had a sort of military bearing, very ramrod straight. He said, "Madam, I was in the British forces that liberated the camps. It's awful to hear that man blame it on us. Get the bastard, madam, get the bastard."

Both the government and opposition agree that the right of assembly needs tightening to prevent neo-Nazi marches at historic landmarks such as the Brandenburg Gate in Berlin. But details still need to be ironed out. (Feb. 18, 2005)

Sixty years ago Sunday, Allied bombers attacked Dresden and the thousands of residents and refugees who lived there. Traces of the militarily dubious decision to bomb the city remain visible today.(Feb. 13, 2005)