Commemorative events marking the 60th anniversary of the liberation of Auschwitz continued throughout Thursday as world leaders spoke of an evil that must never be allowed to surface again. 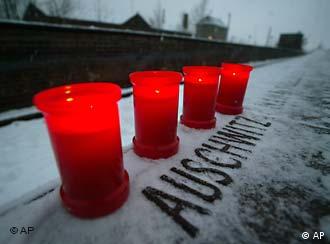 Survivors returned to the place many described as "living hell"

World leaders joined Auschwitz survivors in an emotional ceremony marking the liberation 60 years ago of the Nazi death camp, making a plea for the horrors of the Holocaust never to be forgotten.

Some 1,000 survivors sat in sub-zero temperatures at the open-air memorial as some of the 44 world leaders and fellow former prisoners paid tribute to those who were killed here, most of them Jews. Under softly falling snow, those in attendance heard the mournful whistle of a train, invoking the arrival of the cattle cars once used to herd people to the Auschwitz-Birkenau extermination camp in southern Poland.

Records show at least 1.1 million died. But because many of the victims were "selected" by the SS for immediate extermination in specially built gas chambers and were never registered at Auschwitz, it is impossible for historians to say precisely how many people were killed. The actual death toll is believed to be as high as two million. 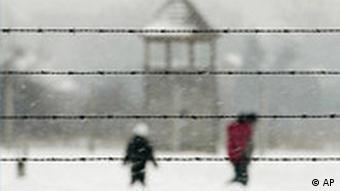 In front of the stark stone memorial built between the rubble of camp's two gas chambers, the elderly survivors listened as world leaders and fellow prisoners paid tribute to those who still live with their brutal memories and those who did not survive. Many wore the prisoner number they were given by the Nazis when they arrived at the camp, the first step in a calculated process to humiliate and dehumanize them.

"I'm No. 4662," one elderly woman said as she filed into the camp. "We had no names here, and I have a hard time calling myself with my real name here. It's too painful."

"Let us remember that we are on the site of the most gigantic cemetery in the world, a cemetery where there are no graves, no stones, but where the ashes of more than one million people lie," Polish Culture Minister Waldemar Dabrowski said.

"Back in September 1940 when I first stood on the assembly ground in Auschwitz, in the crowd of five and a half thousand other Poles, I never imagined I would outlive Hitler or survive World War II," said Bartoszewski, now 82. "In the first 15 months of existence of this awful place, we, the Polish inmates, were all alone. The free world was not interested in our suffering or in our death," he added.

Prisoners in Auschwitz just after being liberated by the Soviets

"Today, 60 years after, a new commitment must be made so that men unite at least to fight against hatred of the other, against anti-Semitism, against racism, against intolerance," the former French health minister said.

The leader of Germany's Central Council of Sinti and Roma, Romani Rose, meanwhile reminded the world that Auschwitz was synonymous with the state-organized genocide of half a million gypsies in Nazi-occupied Europe.

"Thousands of Sinti and Roma were deported here from the Third Reich and from almost all Nazi-occupied European countries. They were subjected to humiliation, torture and brutally murdered," he said.

A shadow over Europe

In a message to the participants to the Auschwitz commemoration, Pope John Paul II, said that the Nazi bid to exterminate the Jewish people had for ever darkened the history of mankind. "No one is permitted to pass by the tragedy of the Shoah. That attempt at the systematic destruction of an entire people falls like a shadow on the history of Europe and the whole world," he said in a message read out by the papal nuncio in Poland, Jozef Kowalczyk. 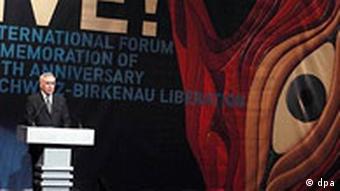 "Today, 60 years on, we still cannot comprehend how and why, in the 20th century, the world was able to remain silent about the Holocaust," said Israeli President Moshe Katsav. He urged participants at a Krakow forum held before the main ceremony not to allow the story of the Holocaust to be distorted by revisionists who seek to deny it ever happened.

The forum of some 400 young people, survivors and politicians marked the start of a poignant day of remembrance at which Polish President Aleksander Kwasniewski called for "future generations never (to) forget."

French President Jacques Chirac urged his countrymen to shoulder their responsibility for the deportations of 80,000 Jews rounded up in French towns and cities during the Nazi occupation. Chirac was speaking as he inaugurated an exhibit in a renovated prisoner block at Auschwitz in honor of 80,000 French nationals -- virtually all of them Jewish -- who were deported to this death camp in southern Poland and others in Nazi-occupied Europe.

Chancellor Schröder warned Germans to be vigilant in the fight against anti-Semitism on Tuesday and expressed his shame as Berlin marked the 60th anniversary of the liberation of Auschwitz. (Jan. 25, 2005)

For the first time in its history, the United Nations on Monday marked the liberation of Nazi death camps during World War II, in an event attended by Holocaust survivors and the foreign ministers of Israel and Germany. (Jan. 24, 2005)