Augsburg bury Hoffenheim in the snow, Bremen beat Berlin at the bottom

Augsburg moved to joint third in the Bundesliga after a 3-1 win against fellow European hopefuls Hoffenheim on Sunday. Earlier, Bremen won only its fifth game of the season as a Franco Di Santo double sank Berlin 2-0. 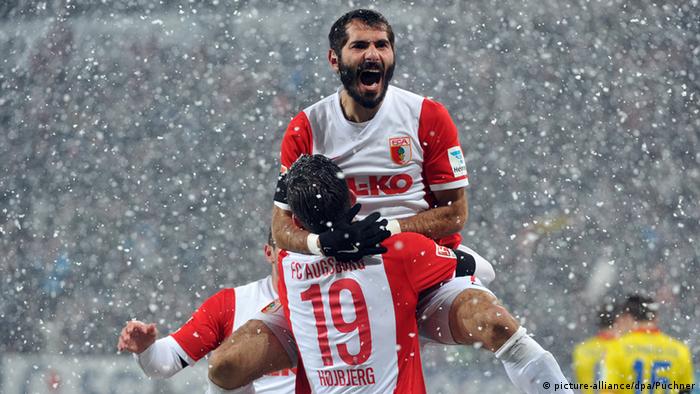 Bayern Munich loanee Pierre Emile Hojbjerg made an impressive debut for Augsburg but it was Halil Altintop and Tobias Werner who did the damage for the Bavarians.

Both scored in a frenetic five-minute spell at the end of the first half which also saw Roberto Firmino net for Hoffenheim. Raul Bobadilla sealed the win at the death.

Snow fell heavily throughout the first half and although the pitch remained playable, visibility was reduced and two teams which like to play passing football were hampered underfoot.

Combative early exchanges saw Hoffenheim’s French forward Anthony Modeste on the wrong side of the referee for a late challenge on Daniel Baier, but Modeste made amends on 16 minutes by teeing up Firmino. The Brazilian playmaker’s first attempt on goal was comfortably saved by Alex Manninger.

On 25 minutes, after creative interplay down the Hoffenheim right, first Daniel Baier and then Argentine striker Bobadilla had shots saved from close range by Oliver Baumann in the visitors‘ goal. Bobadilla then glanced a header over the Hoffenheim bar in the 34thminute.

Augsburg took the lead in the 38th minute when debutant Hojbjerg dug out a cross from near the right corner flag which was met by a powerful downward header from Turkish midfielder Altintop. 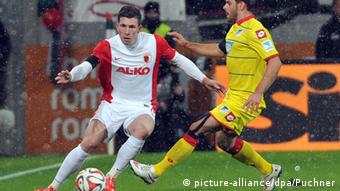 Werner sneaks in a second

Augsburg doubled its advantage in the next attack, after it was awarded a free kick near the right touchline following a foul on Alexander Esswein.

Baumann was then left motionless as an innocuous-looking set-piece from Werner sailed into the net, the goalkeeper seemingly unsighted by an unmarked run across him by Augsburg centre-back Ragnar Klavan.

The snow eased off and the pitch was cleared during the interval, but it did little to help the game as the players appeared to freeze up in the second half.

Modeste sliced an audacious attempt at a bicycle kick in the 48thminute while on 56 minutes, Hojbjerg sent a shot wide from distance. But clear chances were reduced to a premium as heavy snow began falling again in Bavaria.

As Hoffenheim pushed for an equalizer, Augsburg had Alex Manniger to thank for a world-class save in the 93rdminute to deny David Abraham. The Argentine had risen highest in the centre to force his header goalwards.

In its next attack Augsburg made sure of the three points it needed to go level with Gladbach and Schalke, when Bobadilla cut inside from the right touchline and drilled a low shot inside Baumann’s near post.

Di Santo at the double as Bremen sink Berlin

And after seeing results go against it on Saturday, Viktor Skripnik knew his youthful Bremen side had it all to do in Sunday's early game, with Freiburg's impressive win over Frankfurt the talking point at the bottom-end of the table. 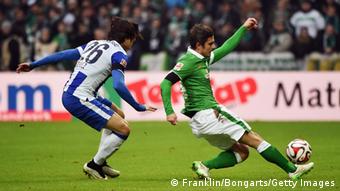 Lying 16th and 14th respectively, Bremen and Hertha both needed points to kick start their 2015 campaigns

The first chance of the game fell to Bremen debutant Jannik Vestergaard, who rifled a shot just over Thomas Kraft's crossbar after five minutes.

Davie Selke then tested Kraft for the first time, but the teenager's weak effort inside the box was simple for the experienced goalkeeper.

The first half was finally brought to life with Franco Di Santo's goal for the home side on 43 minutes. Played onto the edge of the box by Theodore Gebre Selassie, the Argentine striker's looping shot brushed the hands of Kraft before hitting the top corner. Bremen took its 1-0 lead into the break.

Bremen captain Zlatko Junuzovic had the second half's first chance, with his looping shot forcing Kraft into another save.

Again the game drifted and it was not until the 69th minute that either side created another good chance, and it was Di Santo who struck for his second goal of the match and his fourth in his last three Bundesliga games.

Clemens Fritz did well down the right, pulling back his cross just before reaching the touchline. Di Santo's acrobatic effort bounced too high for Kraft, before dipping into the top corner.

That was the last of the action at the Weserstadion, as Bremen leapfrogged Hertha into 12th position, ahead of Paderborn who were thumped by Mainz on Saturday.

Borussia Dortmund and Bayer Leverkusen couldn't find a way past each other in Saturday's 0-0. Both sides had chances, although there weren't many in total, but neither could score. (31.01.2015)

Nils Petersen scored a hat-trick to move Freiburg off the bottom of the table with a 4-1 home win against Frankfurt. Mainz had two heroes in its thumping victory, and there were wins for Schalke, Cologne and Gladbach. (31.01.2015)