Attacks on UN troops in Congo 'not the solution': Denis Mukwege 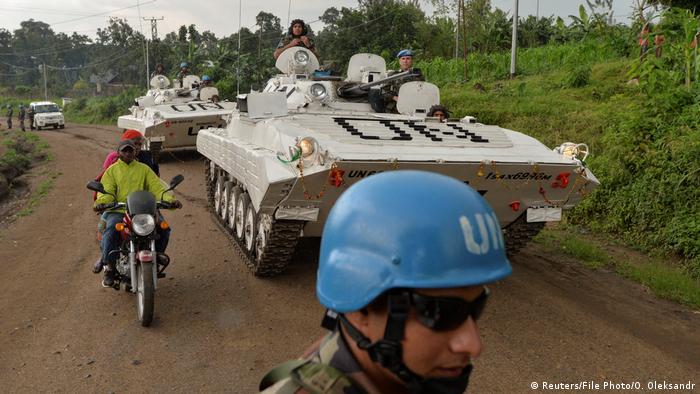 At least 19 people were killed this week in a rebel attack in Oicha, about 30 kilometers (19 miles) from the city of Beni in eastern Congo, the latest attack blamed on the Uganda-based Allied Democratic Forces (ADF) rebels.

This brings the total number of civilians killed since November 5 in massacres attributed to the ADF to 94, according to sources close to the United Nations Organization Stabilization Mission in the Democratic Republic of the Congo (DRC), or MONUSCO. Attacks blamed by the government on the ADF have killed hundreds of civilians in the area around Beni since 2014.

On Monday, Congo's presidential office announced "joint operations" with UN peacekeepers, of whom there are a total of 16,000 in the country. But on a visit to Paris, the speaker of the country's parliament, Jeanine Mabunda, questioned the ongoing UN role in her country amid protests against the mission, saying it was "legitimate for people to ask why this force is still in the DRC." The UN Security Council must renew MONUSCO's mandate by the end of this year.

However, Denis Mukwege, the Congolese gynecologist who won the Nobel Peace Prize in 2018, told DW that "attacks on MONUSCO are not the solution." On a visit to Bonn, Germany, he appealed for calm.

Read more: Mukwege: 'Do not treat sexual violence as taboo' 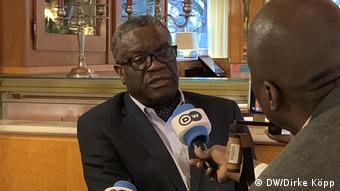 Mukwege: Everyone wants to find scapegoats

DW: The situation in eastern Congo has been very tense for days, with violent demonstrations against MONUSCO in Beni and other cities. People have been killed and wounded; they are accusing the United Nations of failing to defend them from militia attacks. What's your reaction to the protests, and to the anger?

Denis Mukwege: It's very sad, and I can't answer this question without expressing my sympathy to the population of Beni. The people in Beni have been subjected to atrocities for more than five years. Their anger is understandable. But on the other hand, I don't think attacking MONUSCO is a solution. Rather, I think there should be negotiations and dialogue in order to find a good solution. Violence can only result in more violence. Even if MONUSCO has so far not succeeded in ending the crisis, without the presence of the peacekeepers the situation would be much worse.

My message to the people is that we must think about other solutions, especially within the framework of Chapter 7 of the United Nations Charter [this includes, for example, a robust mandate for UN troops, who would then be allowed to use weapons in self-defense, to defend the mission, and to defend civilians — Editor's note]. I believe that's what happened in Ituri [the 2003 conflict between the Hema and the Lendu — Editor's note] with [Operation] Artemis and the French army. It proved effective because it was a short-term operation — but it was very, very effective, and prevented genocide.

How are we to understand the fact that, despite the presence of more than 15,000 peacekeepers and thousands of Congolese soldiers in this region, there are still constant civilian massacres?

This is why I strongly believe we need to think of other solutions. We cannot go on using the same recipes for 10 years if they don't resolve the situation. In my opinion, Chapter 7 should be applied. If it is used correctly — as it was in Ituri — I believe it could bring about a solution. The reaction of the population today to the United Nations forces will not bring any solution.

Who is responsible? The big problem in Congo is that everyone wants to find scapegoats. But we know who the real perpetrators are, and I think that at some point justice must be done. A tribunal could be established to determine who did what.

Who, in your view, is primarily responsible?

I'll give you an example. When the United Nations provides a government [of the former president, Joseph Kabila — Editor's note] with the means to stop the actions of armed groups, and that government, in order to thwart this action by the United Nations, appoints generals to whom sanctions have been applied to oversee the cooperation with the UN, these people must be held accountable for all the atrocities happening in eastern DRC today. And if we don't address problems like that, we'll keep on looking for scapegoats, and that is not going to help us. Sadly, it's our brothers and sisters who are being killed in this atrocious way. There are images [of these acts of violence] circulating on social networks today that are, quite simply, unbearable. A government that refuses to stop these armed groups should be held accountable for its actions.

You work primarily to combat sexual violence against women. What's the situation now, since President Felix Tshisekedi came to power in January?

I am reserving judgment, because I think it's too early, and I don't want to speculate. We must judge on the basis of facts. Right now, I must say that when there is violence, when people are having their throats cut with a machete, you cannot say women are being protected. We have seen images of women who have been killed in the most inhuman way. And it is unacceptable. Today, as long as there are these conflicts, where we do not even know who is fighting whom, it is, unfortunately, women and children who are caught between the warring parties. The situation of women has not improved as long as there are armed groups attacking the civilian population, and women and children in particular.

Along with Yazidi activist Nadia Murad, you were awarded the Nobel Peace Prize in 2018. What has changed since then?

Many things have changed since we were awarded the Nobel Peace Prize. It has allowed issues around sexual violence in conflicts to be addressed in the public arena; we are talking about these issues much more today. For my part, I was co-chair of the G7 Gender Equality Advisory Council. Men often feel they have rights over women. I think that education to promote equality and positive masculinity, and giving women the right to reproductive health, universal education and so on — all that helps. These are all things that should be normal practice in all countries.

Together with the German government we also put forward Resolution 2467, which asked the UN secretary-general, for the first time, to make concrete proposals for dealing with children born of rape. These children are often left to fend for themselves, with no identity, no parentage, and sometimes their mothers are simply forced to abandon them. And these children didn't ask to be born. We have a responsibility toward these children.

Denis Mukwege, 64, founded the Panzi Hospital in Congo's eastern Bukavu province, which has treated over 50,000 victims of sexual violence. In 2018, he was awarded the Nobel Peace Prize, together with the Yazidi activist Nadia Murad, who survived enslavement and sexual abuse by "Islamic State" extremists.

The opposition in the DRC has long maintained that President Felix Tshisekedi is a puppet of former President Joseph Kabila. The new Cabinet shows how powerful the ex-president still is. (26.08.2019)

The attacks killed an unknown number of health workers working to combat an Ebola epidemic in the Democratic Republic of Congo. Dozens of workers have been evacuated due to deadly unrest near a UN peacekeeping base. (28.11.2019)