The country's health minister disagrees with several European countries suspending the AstraZeneca vaccine rollout, saying the "benefit is far greater than the risk." 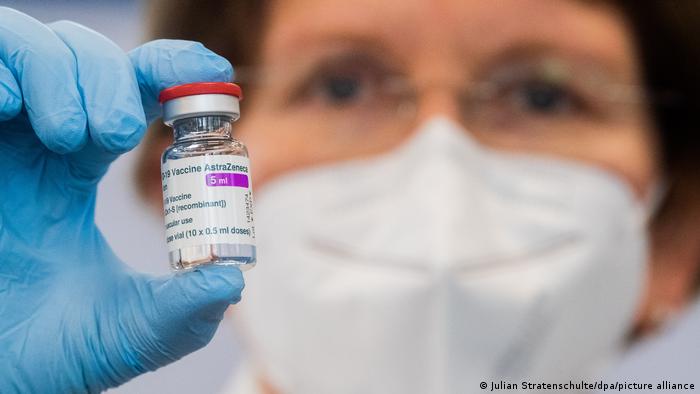 German Health Minister Jens Spahn said Friday there is no evidence of an increase in blood clots in connection with the AstraZeneca COVID vaccine.

Spahn's comments come after Denmark and several other European countries suspended the AstraZeneca vaccine's rollout over reports of people developing severe thrombosis after receiving a dose.

What Jens Spahn, and others, said about AstraZeneca

The health minister spoke after consulting with experts at the European Medicines Agency (EMA), which has approved the shot for use in the EU.

"I regret that ... some countries in the European Union have suspended vaccination with AstraZeneca," Spahn said, adding that Germany takes possible side effects "very seriously."

"From what we know so far, the benefit ... is far greater than the risk," he added.

The EMA said in a statementThursday that information available so far indicates that the number severe blood clotting events in vaccinated people is "no higher than that seen in the general population."

"There is currently no indication that vaccination has caused these conditions," the statement said.

The World Health Organization (WHO) said Friday that the vaccine is safe and that there is no reason to stop using the jab.

AstraZeneca has an "excellent vaccine, as are the other vaccines that are being used," WHO spokeswoman Margaret Harris told reporters at a briefing in Geneva.

"We've reviewed the data on deaths. There has been no death, to date, proven to have be caused by vaccination," she said.

However, in an unrelated development, the EMA said it was listing severe allergic reactions as a possible side effect of the AstraZeneca vaccine in a limited number of cases.

It said the adjustment was being made after 41 reports of possible anaphylaxis from among around 5 million vaccinations in the United Kingdom.

The amendment followed 41 reports of possible anaphylaxis seen among around 5 million vaccinations in the United Kingdom, the EMA said. The Pharmacovigilance Risk Assessment Committee said a link to the vaccine was likely in at least some of these cases.

Why did European countries suspend use?

Denmark halted using the vaccine on Thursday as a "precautionary" principle after one person who had received a dose of the vaccine developed a blood clot and died. Several other countries, including Norway and Italy, followed suit soon after.

Austria suspended use of an AstraZeneca vaccine batch after a person died from "severe blood coagulation problems" following vaccination.

On Friday, Bulgaria halted use of the vaccine over safety concerns, although the health ministry said no severe side effects had been reported in the country thus far. Bulgaria has the lowest vaccination rate in the EU and relies primarily on the AstraZeneca vaccine.

Bulgarian Prime Minister Boyko Borisov said that vaccinations would be halted until the EMA issued Bulgaria a "written statement" with a "clearly confirmed diagnosis" that the vaccine is safe to administer.

The EU has struggled so far with its COVID vaccination rollout, suffering with delivery delays from vaccine suppliers and bureaucratic hurdles.

The EU has so far approved vaccines from BioNTech-Pfizer, Moderna, and AstraZeneca, with Johnson & Johnson's single-dose vaccine added to the list Friday.

Should EU step up its own vaccine diplomacy?