The inability of the United Nations to agree on a consensus regarding Syria has led Turkey to take the lead in building a common accord amongst the international community, to try and bring an end to the conflict. 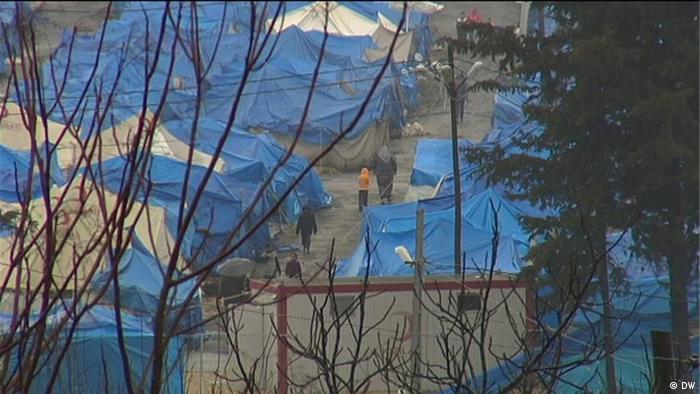 The flood of Syrian refugees is adding to Turkey's problems

Turkey's Prime Minister Recep Tayyip Erdogan and Foreign Minister Ahmet Davutoglu have been increasingly defining Ankara's position as one that does not support Damascus' current government.

While most Turks are against the bloodshed across Syria, opinions in southern provinces are mixed on President Bashar al Assad and Turkey's involvement in the matter.

In the colourful old bazaar of the southern city of Antakya, Turkish men debate the Syrian issue over a game of backgammon at a local teashop. "Turkey shouldn’t be interfering in Syria’s internal affairs," says resident Şaban Doğan waving his cigarette around expressively. "Turkey should solve its own problems first. It would be better if Turkey found a solution rather than stand in opposition." 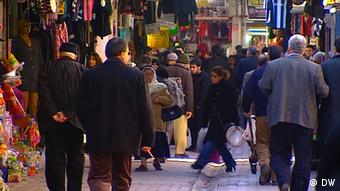 The central bazaar in Antakya

Ayoub Derin nods his head in agreement as he takes a sip of his tea. "I am good with Bashar. I support him," he admits. "Yes, in his role as President, he has been pushing his people but I am reading the Alawite newspaper, the Aydinlik, so we hear what is really happening there."

This is the position of most of the Alawite community who feel a strong connection with Syria's President.

Bashar al Assad is also of the Alawite faith, a branch of Shia Islam that has long been suppressed by ruling governments. Today there are roughly 4 million Alawite Muslims living predominantly in Syria, Lebanon and Turkey.

When much of the Middle East was divided between the French and English following the end of World War I, Paris gave the Alawites in Syria high-ranking army and governmental positions as a reward for backing their mandate there. They have clung to that power ever since.

Alawites in both Syria and neighboring Turkey worry of retaliation by larger religious groups should Bashar al Assad be overthrown.

Ali Yeral is the head of the Alawite Ehli Beyt Cultural and Solidarity Foundation of Antakya and does not want to see a change to Syria's current regime.

"We're supporting freedom and peace instead of supporting a person," he says, "But we're also worried that if President Bashar al Assad leaves, there will be genocide of the Alawite people by those same bloody hands that brought him down." Yeral is also opposed to Turkey's increasing involvement. "Why is democracy only needed in Syria?" he questions. "What about Saudi Arabia where woman are not allowed to vote? Kuwait, Bahrain, Oman, Yemen, Jordan, don't they too need democracy?" 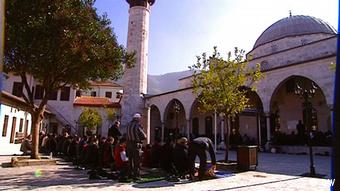 Those who gather for prayers are divided on Bashar al Assad

Friday prayer at Antakya's historic Habib i Neccar mosque brings members from all branches of Islam together. Yet while many here support the opposition, on the streets, people are as divided on President Assad as is the city itself by the Asi River which flows in from Syria.

Supporters of the regime believe external governments are fueling the opposition to gain regional influence.

Recep Bakir is a middle aged Alawi shop owner in the central bazaar. Over the din of the busy crowds he compares Syria with the other revolutions in the region.

"My opinion is that the situation in Syria is good! Assad is a very good man and we are supporting him. The people who are creating chaos in Syria are bad people. One hundred percent America and Israel are behind the uprising in Syria. For example look at Gadhafi, Egypt's situation, America is behind all these events." 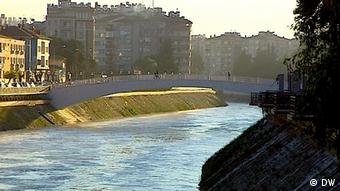 A bridge too far?

The director of the Antakya municipal theatre, Mustafa Vecdikoçak, also believes there is a conspiracy behind the Syrian conflict. Many of his plays reflect social issues and have been performed in Syria several times.

"Look at their objective. The United States is an imperialist force. They want to take less developed countries under their control. That's why in Iran, in Egypt, in Libya they created chaos…now the same thing is happening in Syria. Bashar al Assad is rightly defending his country from this."

But defending the region from the ripple effects a sectarian outbreak in Syria could have on an already sensitive region is Turkey's main concern.

So while the United Nations Security Council and Arab league struggle to produce any real solutions to end the Syrian crisis, this could prove Turkey's time to shine as Ankara seeks to play a bigger diplomatic role in the Middle East, with or without unified internal support.

Britain's foreign minister has lent his support to an Arab League suggestion to deploy a joint UN and Arab League peacekeeping force in Syria. Meanwhile, activists have said that government attacks continued Monday. (13.02.2012)

A group of deserters, known as the Free Syrian Army, has mixed results in unifying opposition to the Syrian regime. Calls are increasing to provide the troops with weapons, but not everyone thinks that is a good idea. (11.02.2012)

As politicians in Western and Arab nations continue to call for Syria's president to step down, Syrians in refugee camps on the Turkish border debate leaving the safety of the camp for anti-government protests at home. (08.02.2012)