Asia′s growing wealth gap is a problem that can no longer be ignored | Business | Economy and finance news from a German perspective | DW | 12.09.2018

Many leaders at this year's World Economic Forum on ASEAN are deeply concerned about the widening gap between rich and poor. But solutions to the problem are thin on the ground. 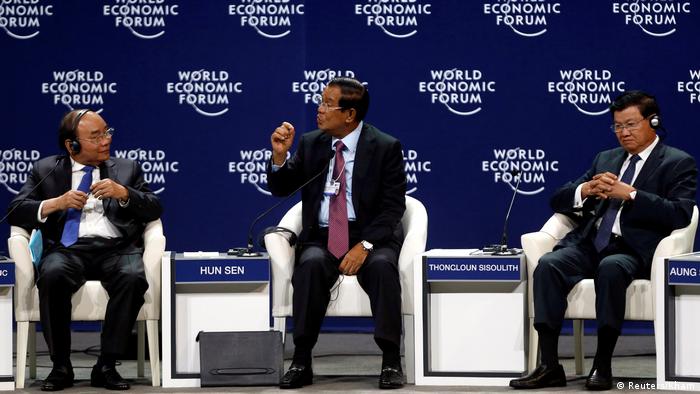 The growing inequality in the Asia-Pacific region is a hot topic at the World Economic Forum on ASEAN being held in Hanoi, Vietnam, from September 11-13. More than 1,000 participants are taking part, among them six heads of government from the region.

One big topic on everyone's mind is the widening gap, despite economic growth, between rich and poor. A point politicians can simply no longer ignore.

Muhammad Chatib Basri was Indonesia's finance minister in 2013-2014. Today, he is an advisor to the World Bank on development policy and teaches economics at the University of Indonesia. The inequality in his country has him deeply concerned. He sees the root of the problem partly in misguided policy.

"We need to make sure the people who are getting the benefit of social spending are really the poor people. In Indonesia's case, we subsidize fuel but it is a fact that the ones who benefit from this subsidy are the middle and upper classes, not the poor. So rather than giving this subsidy, it would be better to give a conditional cash transfer. That kind of change in policy is very important," he told DW during the conference.

But he is not the only one who sees a need for change. In 2017, Oxfam reported that the four richest men in Indonesia have accumulated more wealth than the poorest 100 million people combined. The situation hasn't changed significantly since then.

Vietnam is hosting this year's conference and is one of the fastest growing economies in the region. But here, too, inequality is visible wherever you look. Huge skyscrapers in Hanoi's super-modern business district stand in stark contrast to the neighborhoods where the poorer residents of the city live.

"The wealth gap in Asia is largely driven by wage disparity and differing levels of access to education," the Asian Development Bank states soberly. Stephen P. Groff, the bank's vice president is concerned: "Actually, the situation in Asia is getting worse," he stressed during the Accelerating Inequality Reduction discussion, which the WEF jointly organized with DW in Hanoi. "This will have a negative impact on social cohesion and is slowing economic growth," he said.

Digitization as a solution?

But how can inequality in Asia be reduced? For some, the answer is digitization.

Nadiem Makarim created Indonesia's first unicorn. In 2010, he founded Go-Jek, one of Indonesia's best-known ride-hailing services, which has since expanded to other Asian countries. "Don't underestimate the power of smartphones," he emphasized during the discussion. Cheap mobile phones and inexpensive internet services could help many people in Asia get access to the online world and improve their lives.

The ability to easily make bank transactions using a smartphone means more opportunities to participate in economic life, regardless of location. In some parts of Indonesia this is already noticeable, says Makarim.

The Go-Jek founder is happy his smartphone app is no longer just available in Indonesia but is successful in other Southeast Asian countries as well. The app lets you order a motor scooter taxi, hire a hairdresser to come to your home or have food delivered.

Vietnam's prime minister also wants all citizens to benefit from digitization, at least economically. He announced in Hanoi that the cost of internet access in Vietnam will be drastically reduced, though he didn't elaborate on how that would be accomplished.

Anne-Birgitte Albrectsen, CEO of Plan International, an organization with a particular focus on improving the lives of women and children, paints a less rosy picture of digitization.

"The digital divide is increasing. Women have less access to the internet than men and only 10 percent of employees in digital boardrooms are women," she said, calling for special training programs for women. Albrectsen, who held a top post at the UN for many years, is this year's co-chair of the WEF on ASEAN meeting.

Decision makers in Asia have long recognized the issue of inequality. So far there are no specific solutions as to how that inequality can be reduced. Basri, the former Indonesian finance minister, calls on politicians to act. "Rather than subsidize the goods, subsidize the people."