Ashton opens EU office in Tripoli | World| Breaking news and perspectives from around the globe | DW | 12.11.2011

The European Union has opened an office in Libya as a sign of its willingness to help the country as it moves towards democracy. The EU's top diplomat, Catherine Ashton, has also pledged the bloc's support for women. 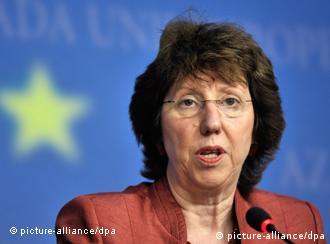 The European Union has opened an office in the Libyan capital, Tripoli, as it reaffirms its readiness to help the country recover from its months-long conflict.

At a ceremony to mark the opening of the mission, EU foreign policy chief Catherine Ashton said her visit was meant to support and assist the new Libya during its transition to democracy.

In a statement on Saturday, Ashton said that "opening a fully fledged EU delegation in Tripoli underlines the EU's commitment to our close relationship with the Libyan people, both during the political transition and in the long term."

Ashton, who was on a previously unannounced visit, also held talks with the country's interim leaders from the National Transitional Council (NTC) and addressed the first Libyan Women's Rights Forum.

Ashton told the forum that Libya's women should ensure that their rights are enshrined in the future constitution.

She also pledged the EU's assistance with women's rights, saying the bloc would "try and help overcome the political and social barriers, to help ensure your role in shaping your future."

Ashton's visit came 48 hours ahead of a meeting of the EU's 27 foreign ministers, at which they will seek ways of helping Libya recuperate from its civil war.

The EU has provided more than 155 million euros ($213 million) in humanitarian support since the crisis began.

It is also participating in a United Nations-led evaluation of Libya's needs, including border management, civil society, women's rights and communications and media.

The EU executive, the European Commission, is making an additional 30 million euros ($40 million) available to help the NTC stabilize the country, and a further 50 million euros ($68 million) will be set aside for longer-term projects.

Libya may serve as example to other oil rich countries

Post-Gadhafi Libya could emerge as a model for other oil rich nations looking to make their energy industries more just and socially responsible, one transparency campaigner told Deutsche Welle. (09.11.2011)