As Italy′s unions protest, its youth look for work | Europe| News and current affairs from around the continent | DW | 11.12.2014

As Italy's unions protest, its youth look for work

Italy's trade unions have called a general strike to protest unemployment. But problems of those who suffer the most from joblessness, the country's youth, are hardly being addressed. Megan Williams reports from Rome. 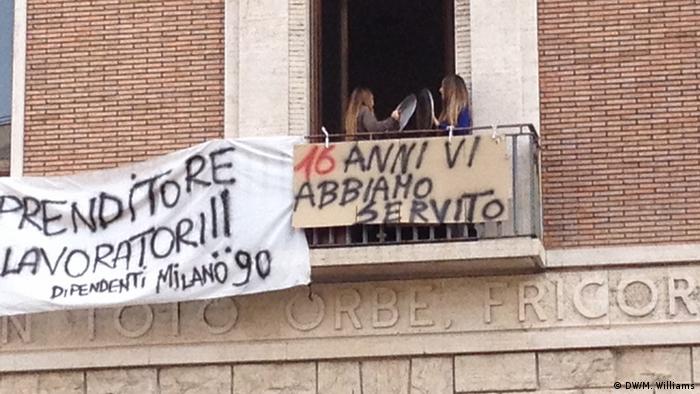 On a sunny day in Rome in early December, the usually peaceful hubbub of the central Piazza San Silvestro was overwhelmed by a cacophony of whistles, drum beating, tambourines and shouts. The noise emanated from the balconies of a government building overlooking the square. There above unfurled banners, banging out their despair, stood some of the 426 cafeteria, cleaning and building maintenance workers who had just received the news that their jobs will end next month, the latest victims of government cut backs.

Among the protesters was 32-year-old Domenico Antonucci, who has worked in the building's cafeteria for the past decade, earning 1,000 euros ($1,240) a month. Until recently, he thought he was one of the lucky few of his generation with a full-time, permanent contract that would see him through to retirement. But with his layoff notice, he says, he will now face what will very likely be a lifetime of underpaid short-term contract jobs - the fate of so many Italians of his generation. 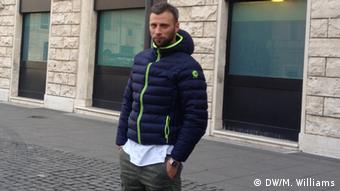 Domenico Antonucci thought he was safe from joblessness

"We're not asking for special treatment," says Antonucci, who says he has had to struggle to pay the bills on salary that is low, but average. "We're just asking to keep our jobs."

It's a request more and more Italians are making, but one that is less likely to be fulfilled any time soon. The real unemployment here is around 15 percent - 45 percent for young people - and is the driving force behind Italy's next general strike on December 12.

Unions organizing it say the protest is taking aim at the most contentious aspect of Prime Minister Matteo Renzi's Jobs Act - a set of reforms to labor norms that passed in the Senate in early December. Renzi says the reforms will make hiring less complicated and daunting for Italy's struggling businesses. Unions say they merely make it easier to fire people.

"In this Jobs Act, the most substantial change is the cancellation of protection against unfair dismissal. This is not a measure to create new jobs, it's simply a measure to create unemployment," Fausto Durante, head of European Affairs for Italy's largest union GCIL, told DW. 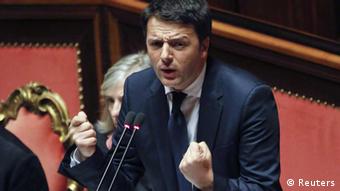 Renzi has tried to making hiring easier for Italian business

Durante also dismisses the Renzi government's plans for public finance for 2015 as a destructive repeat of the austerity measures of the last six years pushed by the European Commission - plans, he and many others point out, that have failed to reverse the trend of dwindling purchasing power, employment rate and economic growth.

Indeed, thousands of businesses shut down each month in Italy and the fear of unemployment is only growing. Italy's National Institute for Statistics reports that 17 percent of Italians, about 10 million people, live in relative poverty. More than six million - 10 percent - live in absolute poverty, mostly in the country's southern regions. While a record number of Italian families are struggling to get by, experts point out it is the country's youth, many of whom have never held down of full-time job, who have the most to be worried about.

"The young people in Italy have been bearing the weight of the high turnover jobs and the older people have decided never to change jobs in order not to lose that job security," says Elisabetta Addis, economics professor at the University of Sasseri, referring to what many in Italy call "employment apartheid." The situation was enough to trigger the concern of the managing director of the International Monetary Fund, Christine Lagarde, who warned this week that Italy could be heading for social explosion if it does not remedy the problem.

Elisabetta Addis says that precisely because so many people are excluded from the full-time jobs unions are trying to protect, it is a waste of energy to focus on labor reform as the magic solution to Italy's recession. Far more urgent, says Addis, is the need to tackle Italy's widespread corruption, its weakened position in international trade, its inefficient public administration and its underdeveloped south.

To do this, she says, the Renzi government needs to invite all the country's traditional political and social players to the table, something it has not done. 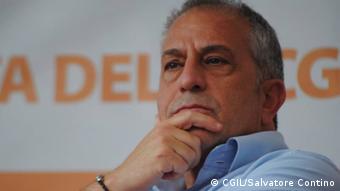 "Mr. Renzi thinks that as the leader of the country he doesn't need any intermediate power between him and the people. He's something of a populist, someone who wants a direct relationship with the masses," he says. "Renzi thinks trade unions, social actors and citizens associations are the bad heritage of the 20th century. It's not only an Italian attitude; at the European level we're experiencing this cancellation of what we used to call social dialogue. This kind of approach leads to social tension and clashes between different parts of society, and that's exactly what's happening in Italy."

The unions hope that through organized protests like the one on December 12, some of this explosive social tension will be channeled into protecting workers' rights. But that assumes young workers will be there.

Soon-to-be unemployed Domenico Antonucci will not. He has an offer for his first odd job, something he says he can't afford to turn down.