The elusive artist Paul Klee aimed to expand the boundaries of the rational in his art. The new show in Munich explores how the Bauhaus master addressed being an artist in a technologically advancing world.

"Construction of Mystery" is the title of the first major exhibition of Paul Klee's work to be held at Munich's Pinakothek der Moderne exhibition hall. The show focuses on the 1920s, when Klee was responding to how technological progress was affecting creativity and how modern subjects could balance objectivity and subjectivity. 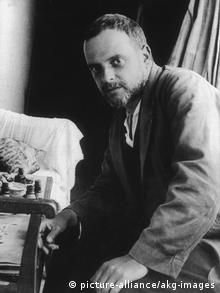 Klee was influenced by different movements, such as Expressionism, Cubism, and Surrealism

Swiss German artist Klee was influenced by Expressionism, Cubism and Surrealism. He was a draftsman and painter, and wrote extensively on color theory. He had an almost magical affinity to nature, which is reflected in his artwork.

Klee was born in Münchenbuchsee, Switzerland, in 1879 to a German music teacher and a Swiss singer. Though a talented musician, Klee chose to study art at the Academy of Fine Arts in Munich.

Drafted as a soldier during World War I, Klee continued to paint throughout the war, and even managed to show his work in several shows during that time. By 1917, he had achieved financial and critical success with his artwork. He later taught at the Bauhaus school of art, design and architecture.

The exhibition "Paul Klee. Construction of Mystery" runs until June 10, 2018.